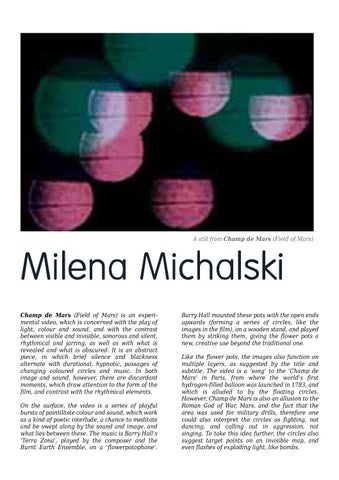 A still from Champ de Mars (Field of Mars)

Milena Michalski Champ de Mars (Field of Mars) is an experimental video, which is concerned with the play of light, colour and sound, and with the contrast between visible and invisible, sonorous and silent, rhythmical and jarring, as well as with what is revealed and what is obscured. It is an abstract piece, in which brief silence and blackness alternate with durational, hypnotic, passages of changing coloured circles and music. In both image and sound, however, there are discordant moments, which draw attention to the form of the film, and contrast with the rhythmical elements. On the surface, the video is a series of playful bursts of pointilliste colour and sound, which work as a kind of poetic interlude, a chance to meditate and be swept along by the sound and image, and what lies between these. The music is Barry Hall’s ‘Terra Zona’, played by the composer and the Burnt Earth Ensemble, on a ‘flowerpotophone’.

Barry Hall mounted these pots with the open ends upwards (forming a series of circles, like the images in the film), on a wooden stand, and played them by striking them, giving the flower pots a new, creative use beyond the traditional one. Like the flower pots, the images also function on multiple layers, as suggested by the title and subtitle. The video is a ‘song’ to the ‘Champ de Mars’ in Paris, from where the world’s first hydrogen-filled balloon was launched in 1783, and which is alluded to by the floating circles. However, Champ de Mars is also an allusion to the Roman God of War, Mars, and the fact that the area was used for military drills, therefore one could also interpret the circles as fighting, not dancing, and calling out in aggression, not singing. To take this idea further, the circles also suggest target points on an invisible map, and even flashes of exploding light, like bombs.