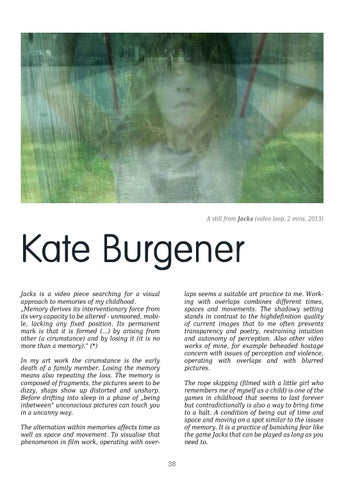 Kate Burgener Jacks is a video piece searching for a visual approach to memories of my childhood. „Memory derives its interventionary force from its very capacity to be altered - unmoored, mobile, lacking any fixed position. Its permanent mark is that it is formed (...) by arising from other (a cirumstance) and by losing it (it is no more than a memory).“ (*)

laps seems a suitable art practice to me. Working with overlaps combines different times, spaces and movements. The shadowy setting stands in contrast to the highdefinition quality of current images that to me often prevents transparency and poetry, restraining intuition and autonomy of perception. Also other video works of mine, for example beheaded hostage concern with issues of perception and violence, operating with overlaps and with blurred pictures.

In my art work the cirumstance is the early death of a family member. Losing the memory means also repeating the loss. The memory is composed of fragments, the pictures seem to be dizzy, shaps show up distorted and unsharp. Before drifting into sleep in a phase of „being inbetween“ unconscious pictures can touch you in a uncanny way.

The rope skipping (filmed with a little girl who remembers me of myself as a child) is one of the games in childhood that seems to last forever but contradictionally is also a way to bring time to a halt. A condition of being out of time and space and moving on a spot similar to the issues of memory. It is a practice of banishing fear like the game Jacks that can be played as long as you need to.

The alternation within memories affects time as well as space and movement. To visualise that phenomenon in film work, operating with over-

Since its foundation, Stigmart10 has encouraged a conception of art based on a dynamic dialogue between artists and audience, reflecting the interactive nature of the creative act itself. A winning formula, according to the doubled number of submissions - more than 990 applicants have sumitted their video works and CV in 2013 - and the increasing popularity of our project. We are glad to present this year's edition of Videofocus, our special Stigmart10 review focused on experimental cinema, original fashion videography and corageous documentary.