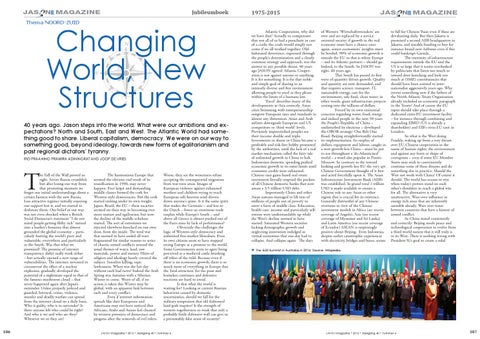 40 years ago. Jason steps into the world. What were our ambitions and expectations? North and South, East and West. The Atlantic World had something good to share. Liberal capitalism, democracy. We were on our way to something good, beyond ideology, towards new forms of egalitarianism and past regional dictators’ tyranny. RIO PRAANING PRAWIRA ADININGRAT AND JOOP DE VRIES

he Fall of the Wall proved us right. Soviet Russia crumbled, but after losing our way from that promising moment we forgot our initial understandings about a certain fairness with the new Russia. Less attractive regimes initially enjoying our support lost it, and we started to dethrone them. Our belief in our way was not even shocked when a British Social Democrat’s statement “I do not mind people getting filthy rich” turned into a banker’s bonanza that almost grounded the global economy – particularly hurting the world’s poor and vulnerable, everywhere and particularly in the South. Was that what we promised? The promise of internet transparency didn’t really work either – but actually opened a new range of vulnerabilities. The internet, invented to circumvent the effect of a nuclear explosion, gradually developed the potential of a nightmare equal to that of the famous mushroom cloud – that never happened again after Japan’s surrender. Unless properly policed and guarded, betrayal, crime, violence, murder and deadly warfare can spread from the internet cloud on a daily basis. Who is guilty, who is to surrender? Is there anyone left who could be right? And who is we and who are they? Wherever we or they are? 106

The harmonious Europe that seemed the obvious end result of its reunification in 1990, may never happen. Ever larger and demanding middle classes formed the cork for Western style democracies. But the cork started sinking under its own weight. Japan, Brazil, the EU – these societies seemed on their way to becoming ever more mature and egalitarian, but now the decline of the middle echelons started. The sort of extremism we rejected elsewhere knocked on our own door, from the inside. The total war that seemed to have ended all wars fragmented for similar reasons to series of chaotic armed conflicts around the usual themes of water, land, raw materials, power and money. Hints of religion and ideology barely covered the subject. Senseless killing, rape, lawlessness. When was the last day without such bad news? Indeed the Arab Spring was Autumn with a Siberian Winter to come. Worst of all, if no action is taken this Winter may be global, with an apparent link between each and every conflict. Even if internet information spreads like dust Europeans and Americans may not have noticed that Africans, Arabs and Asians feel cheated by western promises of democracy and progress after the removals of evil rulers.

Worse, they see the westerners refuse accepting the consequential migration from war-torn areas. Images of European violence against exhausted mothers and children trying to reach European safe heavens send shivers down anyone’s spine. Is it the same spirit that makes the Germans – and less so the Dutch – foster an enormous trade surplus while Europe’s South – and above all Greece is almost pushed out of the Euro zone by lack of performance? Obviously this challenges the logic of Western-style democracy and unlimited free-market liberalism. Even its own citizens seem to have stopped seeing Europe as a promise to the world. Some Governments seem to agree being perceived as a medieval castle brushing off tribes of the wild. Because even if there is no economic growth, there is so much more of everything in Europe that the ‘fatal attraction’ for the poor and homeless continues and defensive reactions are hard to avoid. Is that what the world is waiting for? Looking at current Russian behaviour caused by domestic uncertainties, should we fall for the military temptation that old fashioned land grab inspires? Is the strength of western togetherness so weak that only a probably futile defensive wall can give us a presumably false sense of security?

Atlantic Cooperation, why did we have that? Actually to compensate that not all of us had a parachute in case of a crash; the crash would simply not come if we all worked together. Oldfashioned deterrence, expressed through the people’s determination and a clearly common strategy and approach, was the answer to any possible threat. 40 years ago JASON agreed: Atlantic Cooperation is not against anyone or anything. It is for something. It is for that noble and simple goal of sharing in an intensely diverse and free environment allowing people to excel as they please within the limits of a humane law. ‘Excel’ describes many of the developments in Asia correctly. Asian cities brimming with entrepreneurship outgrow European sizes and standards in almost any dimension. Asian and Arab airlines downgrade European and US competitors to ‘third world’ levels. Previously impoverished peoples see their income double and triple. Investments in shares in China became a profitable and risk-free hobby promoted by the authorities, until the lack of a real market mechanism called the fairy tale of unlimited growth in China to halt. Indonesian domestic spending pushed economic growth to its outer limits until consumer credits were exhausted. Chinese easy gains based real estate investment literally emptied the pockets of all Chinese domestic banks that now amass a 3,5 trillion USD debt. Importantly China and other Asian nations managed to lift tens of millions of people out of poverty to enter a form of middle class. Education, health care, income and particularly selfesteem were understandably up while the West’s decline seemed to have started. Saturated Western societies lacking demographic growth and neglecting innovation indulged in virtual economies that one day had to collapse. And collapse again. The days

of Western ‘Wirtschaftswundern’ are over and are replaced by a service oriented society; if growth in the real economy must have a chance once again, senior economists’ insights must be heeded: 90% of economic growth is outside the EU so that is where Europe – and its Atlantic partners – should go. Indeed, to the South. So JASON was right, 40 years ago. That South has passed its first wave of quantity driven growth. Quality and quantity are now demanded, and that requires science, transport, IT, sustainable energy, care for the environment, safe food, clean water; in other words, giant infrastructure projects costing into the trillions of dollars. Forced by its own existential concerns regarding water, food, energy and indeed people in the next 50 years the People’s Republic of China – undisturbed by elections – developed the OBOR strategy: One Belt One Road. Beijing straightforwardly started its implementation. Its surplus of dollars, equipment and labour, caught in a now growth-less China – must be put to use throughout a ‘de-Atlanticised’ world – a word also popular in Putin’s Moscow. So contrary to the inward looking and growth-less EU the very apt Chinese Government thought of it first and acted forcefully upon it. The Asian Infrastructure Investment Bank (AIIB) was established. In grand total 1 trillion USD is made available to ensure a Chinese role in any Asian or other region that is crucial for its existence. Generally distrustful of any Chinese overtures in view of the Chinese investment models in Africa (see recent coverage of Angola), Asia (see recent coverage of Myanmar and Sri Lanka) and Latin America (see recent coverage of Ecuador) ASEAN is surprisingly positive about Beijing. Even Indonesia, despite earlier catastrophic experiences with electricity, bridges and buses, seems

to fall for Chinese Yuan even if these are devaluating daily. But then Jakarta is promised a second AIIB headquarters in Jakarta, and sizeable funding to buy for instance brand new Airbuses even if this could bankrupt Garuda. The enormity of infrastructure requirements outside the EU and the US is so large that it seems overlooked by politicians that listen too much to inward door knocking and look too much at (SME) constituencies that should have been assisted to internationalise aggressively years ago. Why invent something new if the fathers of the North Atlantic Treaty Organisation already included an economic paragraph in the Treaty? And of course the EU input should take place through a dedicated extra-EU investment facility – for instance through combining and expanding EBRD (US is already a shareholder) and EIB’s extra EU unit in London. So what is the West doing. Frankly, waking up from a rosy dream over EU-Chinese cooperation in the name of human rights, the environment and against any form or shape of corruption – even if some EU Member States may wish to conveniently continue some of these dreams and do something else in practice. Should the West not work with China? Of course it should. The world has oceans to win when today’s powers stand on each other’s shoulders to reach a global win for all. The alternative is very unattractive. Wars over influence in energy rich areas that are inherently unstable already. Wars over water between countries that have a history of armed conflict. As China stated consistently and correctly: Beijing needs peace and technological cooperation to evolve from a third world nation that it still truly is in its West. There is nothing wrong with President Xi’s goal to create a solid