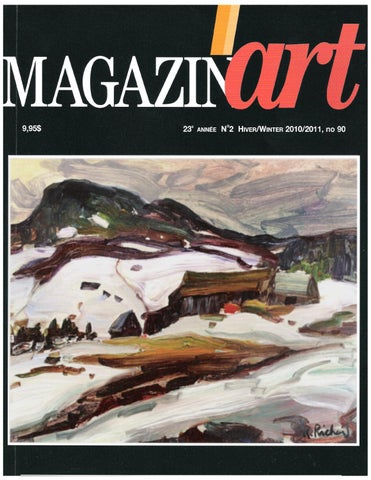 Steve Coffey A Force of Nature

ature and nurture – These two elements were deeply imprinted into Steve Coffey’s psyche at an early age. To this day, they are intertwined in his every artistic expression. From the windswept plains of Canada’s Midwest underbelly to scenes of private family moments, the imagery in Coffey’s paintings displays equal doses of strength and vulnerability. “I don’t want to be didactic in my work; I want it to be reflective,” says Coffey as he stands in front of his easel. Outside a window from his home studio, the heritage house is surrounded by trees and miles-high skies near the rural town of Vulcan, Alberta. Reflective is a good word to describe Coffey’s inspiration, his process and his palette. Coffey, a western Canada artist,

whose medium is oil on canvas, is well known for creating mercurial paintings that express his self-described “memory Polaroids.” He mines his past for inspiration and finds a treasure trove of snapshots to choose from. CP Storm Train shows an immense CP Rail train barreling along tracks that disappear into the landscape. It’s as if the train is hovering, an ethereal presence swept along by the wind that blows faceless clouds overhead. Trains have always played a significant role in Coffey’s life. He was born in Portage La Prairie, Manitoba “back when it was a small town,” he says. When he was eight years old, his mother packed up his brothers and sisters and they rode a train west to Innisfail, Alberta. His father stood at the station and waved goodbye, a honkytonk steel guitarist who was committed MAGAZIN’art, Winter/hiver 2010/2011

to a lifestyle that didn’t harmonize with family routine. For most, train tracks are not on a wish list for a home, but for Coffey, it’s another story. His Innisfail home was literally across the street from train tracks. “When the trains came ripping through, it’s all I’d hear.” Rattling china, vibrating walls, squealing steel rims on tracks, were the soundtrack of Coffey’s life. “It gets in the blood,” he says, adding, “I can’t sleep without the sound of the trains.” Besides trains and paint, music runs in Coffey’s blood; a heady brew of creativity. As a young boy in a rural setting, Coffey began expressing himself through art and music. “I used to draw all the time in high school and played a steel guitar.” The self-taught musician also writes his own lyrics and followed in the footsteps of his musician father by forming a band. “I was a rebel from the get-go,” he says of turning away from a traditional 9-to-5 routine. “I never wanted to follow that way of life.” Music has given Coffey an emotional outlet, while art feeds his questing nature. In addition to his success as an artist, Coffey is a well-known western Canadian singer-songwriter whose “foothillbilly country grunge” style has earned critical acclaim. He and his band “The Lokels” perform regular gigs and their songs are played on the radio, reaching commercial audiences and college-goers alike. In spite of his stage presence, Coffey is an introvert, using the micro-

phone as a barrier to his audience, much like the paintbrush. Although he is a rebel, Steve Coffey’s art training was more traditional. He studied art at Red Deer College and completed his undergraduate work at the University of Calgary. He went on to earn a master’s degree in fine arts from the University of Regina. After university, Coffey worked odd jobs and even learned a trade as a steam engineer. Then he became a successful metal sculptor but found his way back to painting by a tug from his subconscious. “I was pretty connected to the metal scene and in love with the whole formalism of sculpting,” he says. “Then one day I was welding and just stopped. It gnawed at me. After that I realized I wasn’t getting any satisfaction from sculpting anymore.” When asked about his process, Coffey says, “I never work with photos. I respond to my memories and the shifting light of the seasons.” He starts his work day with a cup of tea in the morning and works until two or three in the afternoon. Expansive skies, broad horizons, trains, lone figures and laundry on the line are common themes in Coffey’s world. All are tied to memories and moments. When he was a child, one summer afternoon he watched while his mother hung laundry on the line. “It was such a distinct moment in my life. I was sitting there, and then I saw my brother galloping along on a horse when it tripped

in a ditch.” His brother was thrown from the horse and landed on the gravel road, where he lay bleeding. Coffey’s mum became entangled in the line of clothes before she ran to her injured son. Today, Steve lives in a small Albertan town with his wife Barbara and their two daughters Lydia and Grace, a yellow Labrador named Daisy and a fat cat named Lucy. “My girls are my muses,” he says. Having children became a turning point that made him reassess his touring band lifestyle and think about staying home more, to paint and be a parent. Balance is integral to his personal hapMAGAZIN’art, Winter/hiver 2010/2011

piness. “I work hard through the fall and spring, focusing on painting. In winter, I play in shows with my band.” Over the years, Coffey, has created a big songbook of music still waiting to be recorded. “Now that I feel we finally made it, music provides such a level of satisfaction.” The lyrics to Coffey’s songs are essentially paintings of words, like these lines from “The Past”. He found his home mi-

les from here, he rode a storm with a wink and a tear, he phoned his past with the news of his find, but his past was long gone on a train southbound ride…

Coffey is inspired by travels as well as artists from The Group of Seven, Emily Carr and Alex Colville. His far-flung travels have taken him to places such as London and exhibiting his work in Poland. His paintings can be found in private and public collections throughout North America and Europe. In spite of the art that has inspired him in his travels, Coffey remains most inspired by his own roots. “Canada is my biggest inspiration. When I traveled abroad, I realized that I hadn’t even seen all that our own country has to offer.” Saskatchewan is one of Coffey’s favourite places to visit; not everyone’s idea of a popular travel destination. “I love the wide open fields and expanses and watching storms roll in from the west. It offers such an incredible smorgasbord of information.” When he used to live in a city, Coffey painted prairie landscapes as a way to travel in his mind; back to his comfort zone. Coffey absorbs the politics of the day; it is reflected in the people who face whipping winds amid a swirling landscape. In his painting Father with children three figures stand central against a swirling sky of clouds while wind whips the tall grass at their feet. The father holds his young child on his hip in a protective stance while the older girl stands next to him, her posture leaning towards his strong leg. Nature and nurture reflect Coffey’s passions. “Music is so important to me, as is art. I’m really attracted to the purity of independence that they give me.” Just like the guitar, he feels the paintbrush is an extension of who he is. Coffey’s boundless joie de vivre is reflected in the lyrics from “Skates”. There’s

the winter sun and a winter road, there’s a good warm pub with a real healthy glow, we’ll hold up here and say our hearts goodnight… in the morning shine we’ll lace up our skates… Ingrid de Jong Published in the 2011 Winter Edition in both French & English.

Published in the 2011 Winter Edition in both French & English.