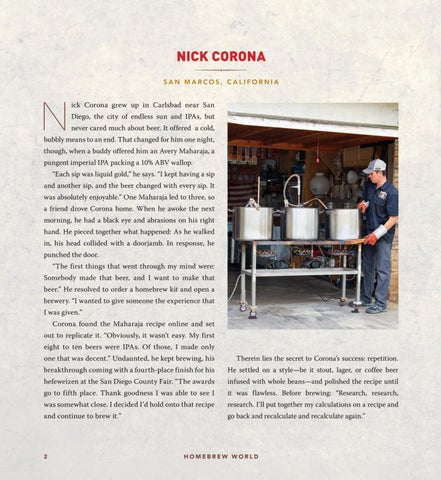 ick Corona grew up in Carlsbad near San Diego, the city of endless sun and IPAs, but never cared much about beer. It offered a cold,

bubbly means to an end. That changed for him one night, though, when a buddy offered him an Avery Maharaja, a pungent imperial IPA packing a 10% ABV wallop. “Each sip was liquid gold,” he says. “I kept having a sip

and another sip, and the beer changed with every sip. It was absolutely enjoyable.” One Maharaja led to three, so a friend drove Corona home. When he awoke the next morning, he had a black eye and abrasions on his right hand. He pieced together what happened: As he walked in, his head collided with a doorjamb. In response, he punched the door. “The first things that went through my mind were: Somebody made that beer, and I want to make that beer.” He resolved to order a homebrew kit and open a brewery. “I wanted to give someone the experience that I was given.” Corona found the Maharaja recipe online and set out to replicate it. “Obviously, it wasn’t easy. My first eight to ten beers were IPAs. Of those, I made only one that was decent.” Undaunted, he kept brewing, his

breakthrough coming with a fourth-place finish for his

He settled on a style—be it stout, lager, or coffee beer

hefeweizen at the San Diego County Fair. “The awards

infused with whole beans—and polished the recipe until

go to fifth place. Thank goodness I was able to see I

it was flawless. Before brewing: “Research, research,

was somewhat close. I decided I’d hold onto that recipe

research. I’ll put together my calculations on a recipe and

and continue to brew it.”

Meet the award winners, visionaries, and scofflaws leading the homebrew revolution. How did they get started? What equipment do they use? Where do they find storage space? What are their hopping techniques, yeast strategies, and aging methods? How do they keep temperatures constant without sophisticated climate controls? What’s their best recipe? Get to know the Stylists who hammer home perfect takes on time-honored beers; the Hop Pack who boldly push IPAs and other hop-forward brews into fragrant new territory; the Wild Ones who are harvesting ambient yeast, unleashing rowdy microbes, and experimenting with souring bacteria to extend the boundaries of good taste; and the Creative Front, who follow one simple rule—no rules at all. Along the way, you’ll discover what triggered the homebrewing renaissance, learn how some of the greatest beers went from kitchen table to world domination, hear from the pros about their successes and failures, and find out how to run your own homebrew tour. 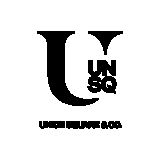