Communication Concept to Tackle the Stigma of Herpes 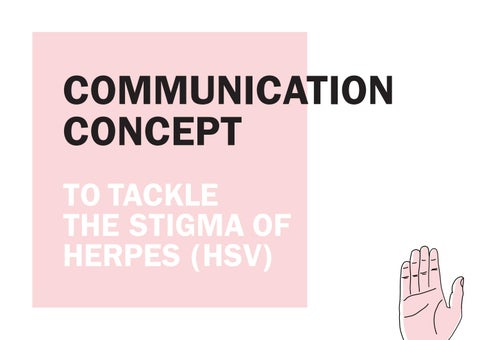 COMMUNICATION CONCEPT TO TACKLE THE STIGMA OF HERPES (HSV)

How can a digital marketing strategy and a visual language concept help to reduce and tackle the stigma of Herpes Simplex Virus?

OBJECTIVES IDEO has brought up the idea that social taboos can be the starting point for innovative products. Monzo, a fintech company, created a product with the awareness of mental health issues. Farewill, a UK startup, offers an online will-writing service. These are just a few companies which saw an opportunity for the creative industry to create more value by tackling social taboos and sensitive issues. (IDEO, 2010) The aim of this project is to identify a destigmatising communication strategie by testing which visual language is successful or unsuccessful. The research will be accomplished by using the stigma of Herpes Simplex Virus (HSV), especially genital herpes.

The research question can be broken down in the following tasks: Online Marketing Strategy (Business Skills)

Visual experiments to create engaging and shareable content about HSV

Document the findings of the experiment

Plan the use of social media

FIELD OF STUDY The research will focus on findings which relate to the Western culture. The field of study contains facts around the stigma of HSV as well as background information about marketing for taboo issues. This helps to define where the gaps are to create a suitable communication concept. The stigma of genital herpes can cause psychological distress. Studies have proven that the combination of psychological distress and poor coping skills can lead to more frequent genital herpes outbreaks (Merin and Pachankis, 2011). According to Woods (2014) genital herpes is defined as a conversational taboo, since it is invisible from the outside, many people fight a hidden battle.

Merin and Pachankis (2011) found out that the reason why many affected people are anxious to disclose their sexual status is the fear of being defined by the stigma and losing their identity. Due to this matter stigma management communication is crucial. It is unclear why certain genital herpes support groups are ineffective with their stigma management communication strategy. There is a gap in the literature which needs future research. (Merin and Pachankis, 2011) Interestingly enough, there was a time when Herpes was just a regular condition and no big deal. The reason why herpes became a feared condition is marketing.

Since the drug industry had a hard time to sell the new antiviral drug, they used an aggressive marketing strategy to raise concern to sell their new drug. This marketing tactic is called disease-mongering. The most successful word to describe the condition was â&amp;#x20AC;&amp;#x153;incurableâ&amp;#x20AC;?, which was the trigger for the stigma which is still existing. Most people are able to deal with the symptoms but they have a hard time to overcome the stigma. Nowadays, genital herpes is next to HIV one of the most stigmatised medical conditions. Even though at 75% of the population carry the virus either knowingly or unknowingly. (Scott, 2015)

FIELD OF STUDY As a conclusion, since marketing was the cause of the whole story, there might also be a way to use marketing to tackle the stigma. According to Merin and Pachankis (2011) it is a balancing act to communicate a destigmatising message in an effective way, but it can free herpes-infected people to get appropriate treatment. The diffusion of innovations is a social marketing theory and gives insights of how, why, and when the word is spread about new ideas. This theory is a powerful tool and was applied in a wide range of acknowledged health communication campaigns including HIV prevention messages.

The aim is to create social change, this can be reached by focussing on audience insights. The findings prove that providing sexual health information online can have positive impact self-efficacy and well-being. (Sundstrom, 2014) To be continuedâ&amp;#x20AC;Ś

FIELD OF STUDY The STD warning campaign (right) uses infected skin to get a repellent reaction from the target audience. This provocative campaign probably increases the stigma of HSV.

These two example show very clearly how big of a difference the visual language can make. The Durex campaign (left) created by Samuel Michael is simple, straight to the point and raises the awareness of Herpes among other STD’s.

In addition, to theoretical papers I will use visual research to support and analyse the topic. There are not many sexual health campaigns which talk about Herpes, because most of them focus on HIV or promote condom use in general.

Empathise Learn about the audience

Define Create a point of view based on insights

Primary Research The research approach is inductive focussing on collecting qualitative data. A visual experiment will be the main source for the primary research. Since it is hard to find a suitable visual language to reduce the stigma of HSV, feedback from end users will be crucial. Therefore a defined focus group will provide feedback about the visual outputs to generate more insights. The framework of the experiment is the design thinking process and based on iterating. Each visual output will be shown to the focus group.

Prototype Building a representation of one or more ideas

Test Sharing of the prototyped ideas with my focus group

The sources for the secondary research will be academic and theoretical papers as well as current journals. The main theoretical background will be provided by stigma management communication and marketing for taboo issues. Furthermore, the subject of stigma will be supported by the knowledge of social, empathy and user-centered design.

WORKSHOP Requirements The printmaking as well as the screen print facilities might be used for the visual experiments around May/June. No specialist materials or guidance will be needed.

AUDIENCE The target audience can be split in different stakeholders. The main audience are the affected people, because they are in direct contact with the stigma of HSV and the goal is to make them more comfortable talking about their status. The research also targets individual creatives and social enterprises who want to stand up for a certain taboo issue, because they can gain more insights. Last but not least the visual experiments will be public and promoted through online channels, because the stigma has to be tackled by herpes-infected as well as uninfected people.

PROJECT OUTCOME A critical reflection with around 8,000 to 10,000 words will be one of the project outcomes. Different visual compositions will be designed to test which visual language is most appealing to the target audience. A blog or a website will be created to show the output of the visual experiments and to gather feedback from the focus group. The additional outcomes will be defined during the process.

The timeline takes planned days of absence into account. The estimated time per weekday is at least five hours.

Technical setup of the website for the visual experiment

Tellis, G.J. (2003). Effective advertising: Understanding when, how, and why advertising works. Sage.

Communication Concept to Tackle the Stigma of Herpes 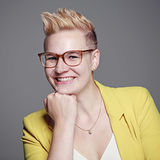