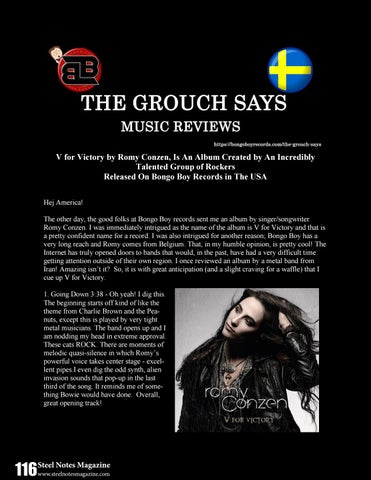 V for Victory by Romy Conzen, Is An Album Created by An Incredibly Talented Group of Rockers Released On Bongo Boy Records in The USA Hej America! The other day, the good folks at Bongo Boy records sent me an album by singer/songwriter Romy Conzen. I was immediately intrigued as the name of the album is V for Victory and that is a pretty confident name for a record. I was also intrigued for another reason; Bongo Boy has a very long reach and Romy comes from Belgium. That, in my humble opinion, is pretty cool! The Internet has truly opened doors to bands that would, in the past, have had a very difficult time getting attention outside of their own region. I once reviewed an album by a metal band from Iran! Amazing isnâ&amp;#x20AC;&amp;#x2122;t it? So, it is with great anticipation (and a slight craving for a waffle) that I cue up V for Victory. 1. Going Down 3:38 - Oh yeah! I dig this. The beginning starts off kind of like the theme from Charlie Brown and the Peanuts, except this is played by very tight metal musicians. The band opens up and I am nodding my head in extreme approval. These cats ROCK. There are moments of melodic quasi-silence in which Romyâ&amp;#x20AC;&amp;#x2122;s powerful voice takes center stage - excellent pipes.I even dig the odd synth, alien invasion sounds that pop-up in the last third of the song. It reminds me of something Bowie would have done. Overall, great opening track! 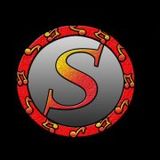