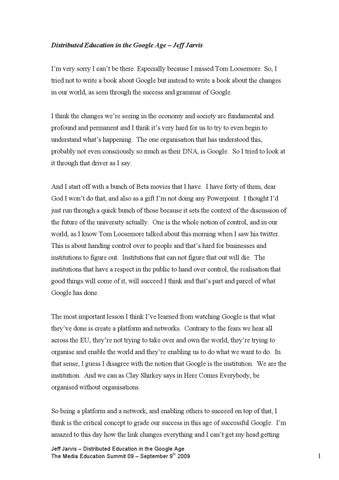 Distributed Education in the Google Age – Jeff Jarvis I’m very sorry I can’t be there. Especially because I missed Tom Loosemore. So, I tried not to write a book about Google but instead to write a book about the changes in our world, as seen through the success and grammar of Google. I think the changes we’re seeing in the economy and society are fundamental and profound and permanent and I think it’s very hard for us to try to even begin to understand what’s happening. The one organisation that has understood this, probably not even consciously so much as their DNA, is Google. So I tried to look at it through that driver as I say. And I start off with a bunch of Beta movies that I have. I have forty of them, dear God I won’t do that, and also as a gift I’m not doing any Powerpoint. I thought I’d just run through a quick bunch of those because it sets the context of the discussion of the future of the university actually. One is the whole notion of control, and in our world, as I know Tom Loosemore talked about this morning when I saw his twitter. This is about handing control over to people and that’s hard for businesses and institutions to figure out. Institutions that can not figure that out will die. The institutions that have a respect in the public to hand over control, the realisation that good things will come of it, will succeed I think and that’s part and parcel of what Google has done. The most important lesson I think I’ve learned from watching Google is that what they’ve done is create a platform and networks. Contrary to the fears we hear all across the EU, they’re not trying to take over and own the world, they’re trying to organise and enable the world and they’re enabling us to do what we want to do. In that sense, I guess I disagree with the notion that Google is the institution. We are the institution. And we can as Clay Shirkey says in Here Comes Everybody, be organised without organisations. So being a platform and a network, and enabling others to succeed on top of that, I think is the critical concept to grade our success in this age of successful Google. I’m amazed to this day how the link changes everything and I can’t get my head getting Jeff Jarvis – Distributed Education in the Google Age The Media Education Summit 09 – September 9th 2009 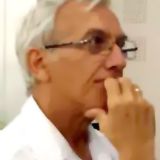