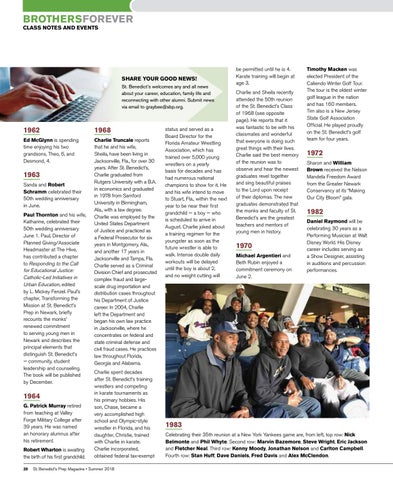 SHARE YOUR GOOD NEWS! St. Benedict’s welcomes any and all news about your career, education, family life and reconnecting with other alumni. Submit news via email to graybee@sbp.org.

Charlie Truncale reports that he and his wife, Sheila, have been living in Jacksonville, Fla., for over 30 years. After St. Benedict’s, Charlie graduated from Rutgers University with a B.A. in economics and graduated in 1978 from Samford University in Birmingham, Ala., with a law degree. Charlie was employed by the United States Department of Justice and practiced as a Federal Prosecutor for six years in Montgomery, Ala., and another 17 years in Jacksonville and Tampa, Fla. Charlie served as a Criminal Division Chief and prosecuted complex fraud and largescale drug importation and distribution cases throughout his Department of Justice career. In 2004, Charlie left the Department and began his own law practice in Jacksonville, where he concentrates on federal and state criminal defense and civil fraud cases. He practices law throughout Florida, Georgia and Alabama.

1963 Sanda and Robert Schramm celebrated their 50th wedding anniversary in June. Paul Thornton and his wife, Katharine, celebrated their 50th wedding anniversary June 1. Paul, Director of Planned Giving/Associate Headmaster at The Hive, has contributed a chapter to Responding to the Call for Educational Justice: Catholic-Led Initiatives in Urban Education, edited by L. Mickey Fenzel. Paul’s chapter, Transforming the Mission at St. Benedict’s Prep in Newark, briefly recounts the monks’ renewed commitment to serving young men in Newark and describes the principal elements that distinguish St. Benedict’s — community, student leadership and counseling. The book will be published by December.

1964 G. Patrick Murray retired from teaching at Valley Forge Military College after 39 years. He was named an honorary alumnus after his retirement. Robert Wharton is awaiting the birth of his first grandchild. 20

status and served as a Board Director for the Florida Amateur Wrestling Association, which has trained over 5,000 young wrestlers on a yearly basis for decades and has had numerous national champions to show for it. He and his wife intend to move to Stuart, Fla., within the next year to be near their first grandchild — a boy — who is scheduled to arrive in August. Charlie joked about a training regimen for the youngster as soon as the future wrestler is able to walk. Intense double daily workouts will be delayed until the boy is about 2, and no weight cutting will

be permitted until he is 4. Karate training will begin at age 3. Charlie and Sheila recently attended the 50th reunion of the St. Benedict’s Class of 1968 (see opposite page). He reports that it was fantastic to be with his classmates and wonderful that everyone is doing such great things with their lives. Charlie said the best memory of the reunion was to observe and hear the newest graduates revel together and sing beautiful praises to the Lord upon receipt of their diplomas. The new graduates demonstrated that the monks and faculty of St. Benedict’s are the greatest teachers and mentors of young men in history.

Timothy Macken was elected President of the Caliendo Winter Golf Tour. The tour is the oldest winter golf league in the nation and has 160 members. Tim also is a New Jersey State Golf Association Official. He played proudly on the St. Benedict’s golf team for four years.

1972 Sharon and William Brown received the Nelson Mandela Freedom Award from the Greater Newark Conservancy at its “Making Our City Bloom” gala.

1982 Daniel Raymond will be celebrating 30 years as a Performing Musician at Walt Disney World. His Disney career includes serving as a Show Designer, assisting in auditions and percussion performances. 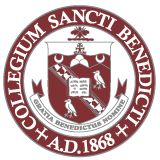