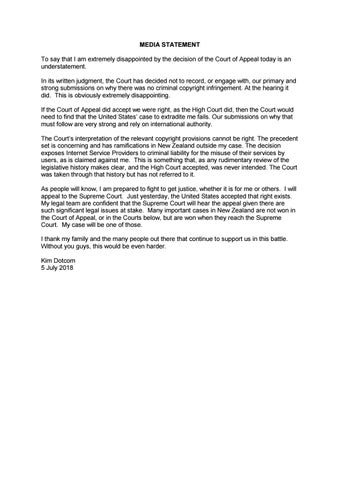 MEDIA STATEMENT To say that I am extremely disappointed by the decision of the Court of Appeal today is an understatement. In its written judgment, the Court has decided not to record, or engage with, our primary and strong submissions on why there was no criminal copyright infringement. At the hearing it did. This is obviously extremely disappointing. If the Court of Appeal did accept we were right, as the High Court did, then the Court would need to find that the United Statesâ&amp;#x20AC;&amp;#x2122; case to extradite me fails. Our submissions on why that must follow are very strong and rely on international authority. The Courtâ&amp;#x20AC;&amp;#x2122;s interpretation of the relevant copyright provisions cannot be right. The precedent set is concerning and has ramifications in New Zealand outside my case. The decision exposes Internet Service Providers to criminal liability for the misuse of their services by users, as is claimed against me. This is something that, as any rudimentary review of the legislative history makes clear, and the High Court accepted, was never intended. The Court was taken through that history but has not referred to it. As people will know, I am prepared to fight to get justice, whether it is for me or others. I will appeal to the Supreme Court. Just yesterday, the United States accepted that right exists. My legal team are confident that the Supreme Court will hear the appeal given there are such significant legal issues at stake. Many important cases in New Zealand are not won in the Court of Appeal, or in the Courts below, but are won when they reach the Supreme Court. My case will be one of those. I thank my family and the many people out there that continue to support us in this battle. Without you guys, this would be even harder. Kim Dotcom 5 July 2018