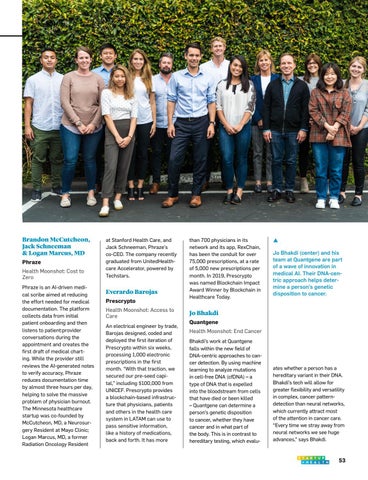 Everardo Barojas Prescrypto Health Moonshot: Access to Care An electrical engineer by trade, Barojas designed, coded and deployed the first iteration of Prescrypto within six weeks, processing 1,000 electronic prescriptions in the first month. “With that traction, we secured our pre-seed capital,” including $100,000 from UNICEF. Prescrypto provides a blockchain-based infrastructure that physicians, patients and others in the health care system in LATAM can use to pass sensitive information, like a history of medications, back and forth. It has more

than 700 physicians in its network and its app, RexChain, has been the conduit for over 75,000 prescriptions, at a rate of 5,000 new prescriptions per month. In 2019, Prescrypto was named Blockchain Impact Award Winner by Blockchain in Healthcare Today.

p Jo Bhakdi (center) and his team at Quantgene are part of a wave of innovation in medical AI. Their DNA-centric approach helps determine a person’s genetic disposition to cancer.

Jo Bhakdi Quantgene Health Moonshot: End Cancer Bhakdi’s work at Quantgene falls within the new field of DNA-centric approaches to cancer detection. By using machine learning to analyze mutations in cell-free DNA (cfDNA) – a type of DNA that is expelled into the bloodstream from cells that have died or been killed – Quantgene can determine a person’s genetic disposition to cancer, whether they have cancer and in what part of the body. This is in contrast to hereditary testing, which evalu-

ates whether a person has a hereditary variant in their DNA. Bhakdi’s tech will allow for greater flexibility and versatility in complex, cancer patterndetection than neural networks, which currently attract most of the attention in cancer care. “Every time we stray away from neural networks we see huge advances,” says Bhakdi. 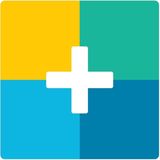