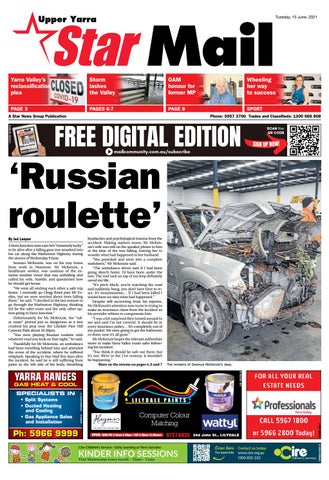 Wheeling her way to success

A Yarra Junction man says he’s “extremely lucky” to be alive after a falling gum tree smashed into his car along the Warburton Highway during the storms of Wednesday 9 June. Seamus McKenzie, was on his way home from work in Montrose. Mr McKenzie, a healthcare worker, was cautious of the extreme weather event that was unfolding and called his wife, Narelle, and questioned how he should get home. “We were all wishing each other a safe trip home. I normally go Clegg Road past Mt Evelyn, but we were worried about trees falling there,” he said. “I decided at the last minute to go through the Warburton Highway, thinking it’d be the safer route and the only other option going to Yarra Junction.” Unfortunately for Mr McKenzie, the “safer route” proved just as dangerous as a tree crushed his jeep near the Lilydale Pine Hill Caravan Park about 10.30pm. “You were playing Russian roulette with whatever road you took on that night,” he said. Thankfully for Mr Mckenzie, an ambulance had been travelling behind him and attended the scene of the accident, where he suffered whiplash. Speaking to Star Mail five days after the incident, he said he is still suffering from pains to the left side of his body, throbbing

headaches and psychological trauma from the accident. Making matters worse, Mr McKenzie’s wife was still on the speaker phone to him at the time of the tree falling, leaving her to wonder what had happened to her husband. “She panicked and went into a complete meltdown,” Mr Mckenzie said. “The ambulance driver said if I had been going 4km/h faster, I’d have been under the tree. The roof rack on top of my Jeep definitely saved my life. “It’s pitch black, you’re watching the road and suddenly, bang, you don’t have time to react. It’s instantaneous… If I had been killed I would have no idea what had happened.” Despite still recovering from his injuries, Mr McKenzie’s attention now turns to trying to make an insurance claim from the incident as his provider refuses to compensate him. “I was a bit surprised they turned around to me and said I’m not covered. It should be in every insurance policy… It’s completely out of my pocket. We were going to get the bathroom re-done, now it’s all gone.” Mr McKenzie hopes the relevant authorities move to make Yarra Valley roads safer following his incident. “You think it should be safe out there, but it’s not. We’re in the 21st century, it shouldn’t be happening.” More on the storms on pages 4, 6 and 7

KINDER INFO SESSIONS First Wednesday every month - 10am - 11am