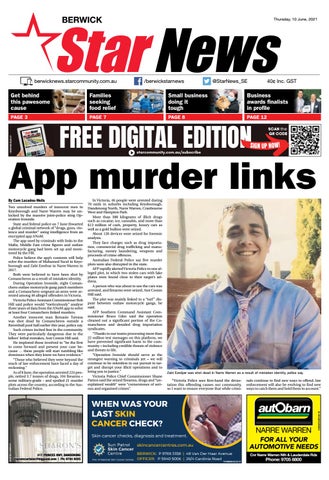 Get behind this pawesome cause

App murder links Two unsolved murders of innocent men in Keysborough and Narre Warren may be unlocked by the massive joint-police sting Operation Ironside. State and federal police on 7 June thwarted a global criminal network of “drugs, guns, violence and murder” using intelligence from an encrypted app ANoM. The app used by criminals with links to the Mafia, Middle East crime figures and outlaw motorcycle gang had been set up and monitored by the FBI. Police believe the app’s contents will help solve the murders of Muhamed Yucel in Keysborough and Zabi Ezedvar in Narre Warren in 2017. Both were believed to have been shot by Comancheros as a result of mistaken identity. During Operation Ironside, eight Comanchero outlaw motorcycle gang patch members and a Comanchero sergeant-at-arms were arrested among 46 alleged offenders in Victoria. Victoria Police Assistant Commissioner Rob Hill said police would “meticulously” analyse three years of data from the ANoM app to solve at least four Comanchero linked murders. Another innocent man Ikenasio Tuivasa was shot dead by Comancheros outside a Ravenhall pool hall earlier this year, police say. Such crimes incited fear in the community. They were particularly dangerous due to the killers’ lethal mistakes, Asst Comm Hill said. He implored those involved to “be the first to come forward and present your case because … these people will start tumbling like dominoes when they know we have evidence.” “Those who believed they were beyond the reach of law enforcement have faced a day of reckoning.” As of 8 June, the operation arrested 224 people, netted 3.7 tonnes of drugs, 104 firearms – some military-grade - and spoiled 21 murder plots across the country, according to the Australian Federal Police.

In Victoria, 46 people were arrested during 70 raids in suburbs including Keysborough, Dandenong North, Narre Warren, Cranbourne West and Hampton Park. More than 500 kilograms of illicit drugs such as cocaine, ice, cannabis, and more than $13 million of cash, property, luxury cars as well as a gold bullion were seized. About 120 devices were seized for forensic analysis. They face charges such as drug importation, commercial drug trafficking and manufacturing, money laundering, weapons and proceeds of crime offences. Australian Federal Police say five murder plots were also disrupted in the state. AFP rapidly alerted Victoria Police to one alleged plot, in which two stolen cars with fake plates were found close to their target’s address. A person who was about to use the cars was arrested, and firearms were seized, Asst Comm Hill said. The plot was mainly linked to a “turf” dispute between outlaw motorcycle gangs, he said. AFP Southern Command Assistant Commissioner Bruce Giles said the operation cleaned out a significant portion of the Comancheros and derailed drug importation syndicates. “Thanks to our teams processing more than 22 million text messages on this platform, we have prevented significant harm to the community – including credible threats of violence and threats to life. “Operation Ironside should serve as the strongest warning to criminals yet – we will continue to be relentless in our pursuit to target and disrupt your illicit operations and to bring you to justice.” Victoria Police Chief Commissioner Shane Patton said the seized firearms, drugs and “unexplained wealth” were “cornerstones of serious and organised crimes”.

Zabi Ezedyar was shot dead in Narre Warren as a result of mistaken identity, police say. “Victoria Police sees first-hand the devastation this offending causes our community, so I want to ensure everyone that while crimi-

WHEN WAS YOUR LAST SKIN CANCER CHECK? NARRE WARREN

FOR ALL YOUR AUTOMOTIVE NEEDS