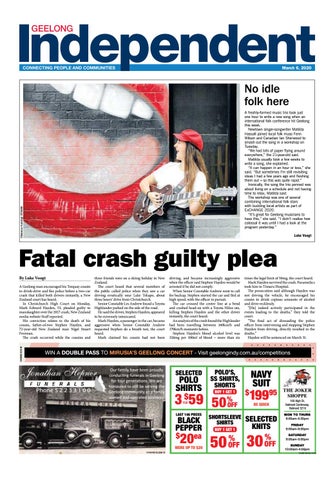 A freshly-formed music trio took just one hour to write a new song when an international folk conference hit Geelong this week. Newtown singer-songwriter Matilda Hassall joined local folk muso Fenn Wilson and Canadian Ian Sherwood to smash out the song in a workshop on Tuesday. “We had bits of paper lying around everywhere,” the 21-year-old said. Matilda usually took a few weeks to write a song, she explained. “It can happen in an hour or less,” she said. “But sometimes I’m still revisiting ideas I had a few years ago and leshing them out – so this was quite rapid.” Ironically, the song the trio penned was about living on a schedule and not having time to relax, Matilda said. The workshop was one of several combining international folk stars with budding local artists as part of ExCHANGE 2020. “It’s great for Geelong musicians to have this,” she said. “I didn’t realise how colossal it was until I had a look at the program yesterday.” Luke Voogt

A Geelong man encouraged his Torquay cousin to drink-drive and lee police before a two-car crash that killed both drivers instantly, a New Zealand court has heard. In Christchurch High Court on Monday, Mark Edward Hayden, 53, pleaded guilty to manslaughter over the 2017 crash, New Zealand media website Stuf reported. His conviction relates to the death of his cousin, father-of-two Stephen Hayden, and 72-year-old New Zealand man Nigel Stuart Freeman. he crash occurred while the cousins and

three friends were on a skiing holiday in New Zealand. he court heard that several members of the public called police when they saw a car driving erratically near Lake Tekapo, about three hours’ drive from Christchurch. Senior Constable Les Andrew found a Toyota Highlander parked on the side of the road. He said the driver, Stephen Hayden, appeared to be extremely intoxicated. Mark Hayden, a passenger in the car, became aggressive when Senior Constable Andrew requested Stephen do a breath test, the court heard. Mark claimed his cousin had not been

driving, and became increasingly aggressive when the oicer said Stephen Hayden would be arrested if he did not comply. When Senior Constable Andrew went to call for backup, Stephen started the car and led at high speed, with the oicer in pursuit. he car crossed the centre line at a bend and crashed head-on with a Toyota Hilux ute, killing Stephen Hayden and the other driver instantly, the court heard. An analysis of the crash found the Highlander had been travelling between 160km/h and 170km/h moments before. Stephen Hayden’s blood alcohol level was 326mg per 100ml of blood – more than six

times the legal limit of 50mg, the court heard. Mark Hayden survived the crash. Paramedics took him to Timaru Hospital. he prosecution said although Hayden was not driving the vehicle, he encouraged his cousin to drink copious amounts of alcohol and drive recklessly. “[He] indeed actively participated in the events leading to the deaths,” they told the court. “he inal act of dissuading the police oicer from intervening and stopping Stephen Hayden from driving, directly resulted in the deaths.” Hayden will be sentenced on March 31.