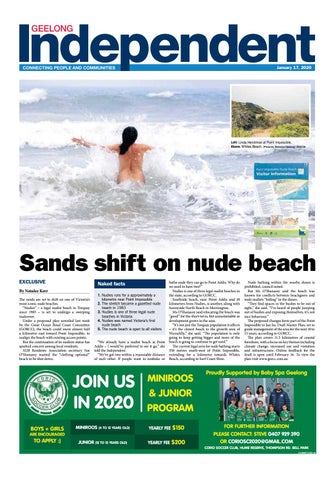 By Natalee Kerr he sands are set to shit on one of Victoria’s most iconic nude beaches. “Nudies” – a legal nudist beach in Torquay since 1983 – is set to undergo a sweeping makeover. Under a proposed plan unveiled last week by the Great Ocean Road Coast Committee (GORCC), the beach could move almost half a kilometre east toward Point Impossible, to realign the beach with existing access points. But the continuation of its nudism status has sparked concern among local residents. 3228 Residents Association secretary Sue O’Shanassy wanted the “clothing optional” beach to be shut down.

1. Nudies runs for a approximately a kilometre near Point Impossible 2. The stretch became a gazetted nude beach in 1983 3. Nudies is one of three legal nude beaches in Victoria 4. Nudies was named Victoria’s irst nude beach 5. The nude beach is open to all visitors “We already have a nudist beach at Point Addis – I would’ve preferred to see it go,” she told the Independent. “We’ve got two within a reasonable distance of each other. If people want to sunbake or

bathe nude they can go to Point Addis. Why do we need to have two?” Nudies is one of three legal nudist beaches in the state, according to GORCC. Southside beach, near Point Addis and 10 kilometres from Nudies, is another, along with Sunnyside North Beach in Mornington. Ms O’Shanassy said relocating the beach was “good” for the short-term, but unsustainable as development grows in the area. “It’s not just the Torquay population it afects – it’s the closest beach to the growth area of Warralilly,” she said. “he population is only going to keep getting bigger and more of the beach is going to continue to get used.” he current legal area for nude bathing starts 350 metres south-west of Point Impossible, extending for a kilometre towards Whites Beach, according to Surf Coast Shire.

Nude bathing within the nearby dunes is prohibited, council noted. But Ms O’Shanassy said the beach was known for conlicts between beachgoers and male nudists “hiding” in the dunes. “hey ind spaces in the bushes to be out of sight,” she said. “I’ve heard of people jumping out of bushes and exposing themselves, it’s not nice behaviour.” he proposed changes form part of the Point Impossible to Jan Juc Drat Master Plan, set to guide management of the area for the next 10 to 15 years, according to GORCC. he plan covers 11.5 kilometres of coastal foreshore, with a focus on key themes including climate change, increased use and visitation and infrastructure. Online feedback for the drat is open until February 16. To view the plan visit www.gorcc.com.au