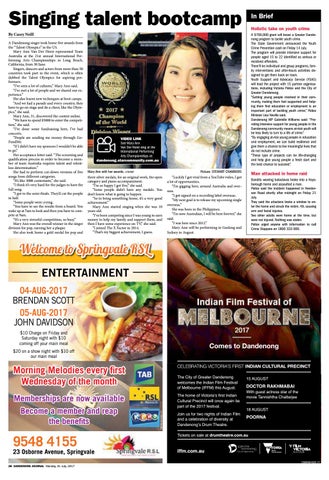 By Casey Neill A Dandenong singer took home five awards from the “Talent Olympics” in the US. Mary Ann Van Der Horst represented Team Australia at the 21st annual International Performing Arts Championships in Long Beach, California, from 30 June. Singers, dancers and actors from more than 50 countries took part in the event, which is often dubbed the Talent Olympics for aspiring performers. “I’ve seen a lot of cultures,” Mary Ann said. “I’ve met a lot of people and we shared our experience.” She also learnt new techniques at boot camps. “And we had a parade and every country, they have to go on stage and do a cheer, like the Olympics,” she said. Mary Ann, 31, discovered the contest online. “We have to spend $5000 to enter the competition,” she said. “I’ve done some fundraising here, I’ve had concerts. “People are sending me money through GoFundMe. “If I didn’t have my sponsors I wouldn’t be able to go.” Her acceptance letter said: “The screening and qualification process in order to become a member of team Australia requires talent and relentless determination.” She had to perform cut-down versions of five songs from different categories. “It’s like 3000 contestants,” she said. “I think it’s very hard for the judges to have the full song. “I got to the semi-finals. They’d cut the people in half. “Some people were crying. “You have to see the results from a board. You wake up at 7am to look and then you have to compete at 9am. “It’s a very stressful competition, so busy.” Mary Ann was the overall winner in the singer division for pop, earning her a plaque. She also took home a gold medal for pop and

A $700,000 grant will boost a Greater Dandenong program to tackle youth crime. The State Government announced the Youth Crime Prevention cash on Friday 14 July. The program will provide intensive support for people aged 15 to 22 identified as serious or recidivist offenders. There’ll be individual and group programs, family interventions and after-hours activities designed to get them back on track. Youth Support and Advocacy Service (YSAS) will lead the project with 15 partner organisations, including Victoria Police and the City of Greater Dandenong. “Getting young people involved in their community, making them feel supported and helping them find education or employment is an important part of tackling youth crime,” Police Minister Lisa Neville said. Dandenong MP Gabrielle Williams said: “Providing intensive support for young people in the Dandenong community means at-risk youth will be less likely to turn to a life of crime.” “By engaging at-risk young people in education and employment, we can build resilience and give them a chance to live meaningful lives that do not include crime. “These type of projects can be life-changing and help give young people a fresh start and the best chance to succeed.”

VIDEO LINK See Mary Ann Van Der Horst sing at the International Performing Arts Championships at: dandenong.starcommunity.com.au Mary Ann with her awards. 170787 three silver medals, for an original work, the open category and piano accompaniment. “I’m so happy I got five,” she said. “Some people didn’t have any medals. You don’t know what is going to happen. “So to bring something home, it’s a very good achievement.” Mary Ann started singing when she was 10 years old. “I’ve been competing since I was young to earn money to help my family and support them, and then I have some experience on TV,” she said. “I joined The X Factor in 2014. “That’s my biggest achievement, I guess.

Picture: STEWART CHAMBERS “Luckily I got viral from a YouTube video, I got a lot of opportunities. “I’m gigging here, around Australia and overseas. “I got signed on a recording label overseas. “My next goal is to release my upcoming single overseas.” She was born in the Philippines. “I’m now Australian, I will be here forever,” she said. “I was here since 2012.” Mary Ann will be performing in Geelong and Sydney in August.

Man attacked in home raid Bandits wearing balaclavas broke into a Keysborough home and assaulted a man. Police said the incident happened in Henderson Road shortly after midnight on Friday 21 July. They said the attackers broke a window to enter the home and struck the victim, 49, causing arm and facial injuries. Two other adults were home at the time, but were not injured. Nothing was stolen. Police urged anyone with information to call Crime Stoppers on 1800 333 000.

Morning Melodies every first Wednesday of the month

Memberships are now available Become a member and reap the benefits

7KHKRPHRI9LFWRULD·VÀUVW,QGLDQ Cultural Precinct will once again be part of the 2017 festival.

The City of Greater Dandenong welcomes the Indian Film Festival of Melbourne (IFFM) this August.

Tickets on sale at drumtheatre.com.au