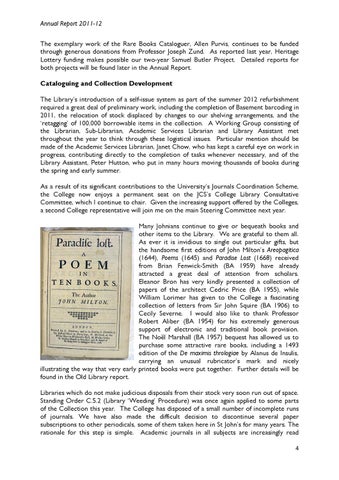 Annual Report 2011-12 The exemplary work of the Rare Books Cataloguer, Allen Purvis, continues to be funded through generous donations from Professor Joseph Zund. As reported last year, Heritage Lottery funding makes possible our two-year Samuel Butler Project. Detailed reports for both projects will be found later in the Annual Report. Cataloguing and Collection Development The Library’s introduction of a self-issue system as part of the summer 2012 refurbishment required a great deal of preliminary work, including the completion of Basement barcoding in 2011, the relocation of stock displaced by changes to our shelving arrangements, and the ‘retagging’ of 100,000 borrowable items in the collection. A Working Group consisting of the Librarian, Sub-Librarian, Academic Services Librarian and Library Assistant met throughout the year to think through these logistical issues. Particular mention should be made of the Academic Services Librarian, Janet Chow, who has kept a careful eye on work in progress, contributing directly to the completion of tasks whenever necessary, and of the Library Assistant, Peter Hutton, who put in many hours moving thousands of books during the spring and early summer. As a result of its significant contributions to the University’s Journals Coordination Scheme, the College now enjoys a permanent seat on the JCS’s College Library Consultative Committee, which I continue to chair. Given the increasing support offered by the Colleges, a second College representative will join me on the main Steering Committee next year. Many Johnians continue to give or bequeath books and other items to the Library. We are grateful to them all. As ever it is invidious to single out particular gifts, but the handsome first editions of John Milton’s Areopagitica (1644), Poems (1645) and Paradise Lost (1668) received from Brian Fenwick-Smith (BA 1959) have already attracted a great deal of attention from scholars. Eleanor Bron has very kindly presented a collection of papers of the architect Cedric Price (BA 1955), while William Lorimer has given to the College a fascinating collection of letters from Sir John Squire (BA 1906) to Cecily Severne. I would also like to thank Professor Robert Aliber (BA 1954) for his extremely generous support of electronic and traditional book provision. The Noël Marshall (BA 1957) bequest has allowed us to purchase some attractive rare books, including a 1493 edition of the De maximis thrologiae by Alanus de Insulis, carrying an unusual rubricator’s mark and nicely illustrating the way that very early printed books were put together. Further details will be found in the Old Library report. Libraries which do not make judicious disposals from their stock very soon run out of space. Standing Order C.5.2 (Library ‘Weeding’ Procedure) was once again applied to some parts of the Collection this year. The College has disposed of a small number of incomplete runs of journals. We have also made the difficult decision to discontinue several paper subscriptions to other periodicals, some of them taken here in St John’s for many years. The rationale for this step is simple. Academic journals in all subjects are increasingly read 4 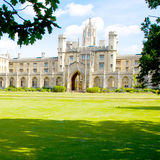