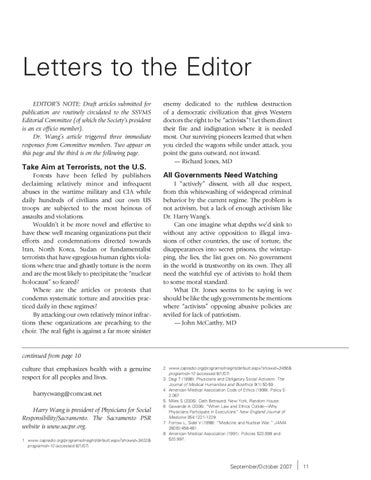 Letters to the Editor EDITOR’S NOTE: Draft articles submitted for publication are routinely circulated to the SSVMS Editorial Committee (of which the Society’s president is an ex officio member). Dr. Wang’s article triggered three immediate responses from Committee members. Two appear on this page and the third is on the following page.

Take Aim at Terrorists, not the U.S. Forests have been felled by publishers declaiming relatively minor and infrequent abuses in the wartime military and CIA while daily hundreds of civilians and our own US troops are subjected to the most heinous of assaults and violations. Wouldn’t it be more novel and effective to have these well meaning organizations put their efforts and condemnations directed towards Iran, North Korea, Sudan or fundamentalist terrorists that have egregious human rights violations where true and ghastly torture is the norm and are the most likely to precipitate the “nuclear holocaust” so feared? Where are the articles or protests that condemn systematic torture and atrocities practiced daily in these regimes? By attacking our own relatively minor infractions these organizations are preaching to the choir. The real fight is against a far more sinister

enemy dedicated to the ruthless destruction of a democratic civilization that gives Western doctors the right to be “activists”! Let them direct their fire and indignation where it is needed most. Our surviving pioneers learned that when you circled the wagons while under attack, you point the guns outward, not inward. — Richard Jones, MD

All Governments Need Watching I “actively” dissent, with all due respect, from this whitewashing of widespread criminal behavior by the current regime. The problem is not activism, but a lack of enough activism like Dr. Harry Wang’s. Can one imagine what depths we’d sink to without any active opposition to illegal invasions of other countries, the use of torture, the disappearances into secret prisons, the wiretapping, the lies, the list goes on. No government in the world is trustworthy on its own. They all need the watchful eye of activists to hold them to some moral standard. What Dr. Jones seems to be saying is we should be like the ugly governments he mentions where “activists” opposing abusive policies are reviled for lack of patriotism. — John McCarthy, MD

continued from page 10 culture that emphasizes health with a genuine respect for all peoples and lives. harrycwang@comcast.net Harry Wang is president of Physicians for Social Responsibility/Sacramento. The Sacramento PSR website is www.sacpsr.org. 1 www.capradio.org/programs/insight/default.aspx?showid=3402&amp; programid=10 (accessed 8/1/07) 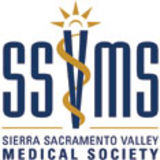