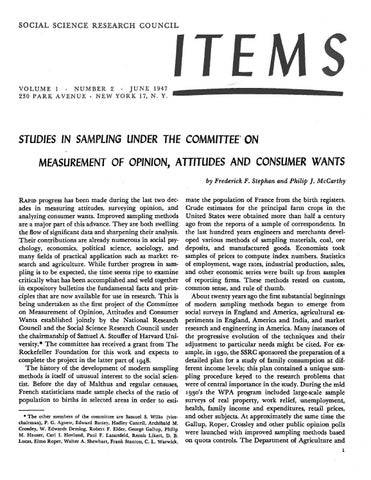 STUDIES IN SAMPLING UNDER THE COMMITTEE' ON MEASUREMENT OF OPINION, ATTITUDES AND CONSUMER WANTS by Frederick F. Stephan and Philip RAPID progress has been made during the last two dec-

ades in measuring attitudes, surveying opinion, and analyzing consumer wants. Improved sampling methods are a major part of this advance. They are both swelling the flow of significant data and sharpening their analysis. Their contributions are already numerous in social psychology, economics, political science, sociology, and many fields of practical application such as market research and agriculture. While further progress in sampling is to be expected, the time seems ripe to examine critically what has been accomplished and weld together in expository bulletins the fundamental facts and principles that are now available for use in research. This is being undertaken as the first project of the Committee on Measurement of Opinion, Attitudes and Consumer Wants established jointly by the National Research Council and the Social Science Research Council under the chairmanship of Samuel A. Stouffer of Harvard University.· The committee has received a grant from The Rockefeller Foundation for this work and expects to complete the project in the latter part of 1948. The history of the development of modem sampling methods is itself of unusual interest to the social scientist. Before the day of Malthus and regular censuses, French statisticians made sample checks of the ratio of population to births in selected areas in order to esti• The other members of the committee are Samuel S. Wilks (vice· chairman), P. G. Agnew, Edward Battey, Hadley Cantril, Archibald M. Crossley, W. Edwards Deming, Robert F. Elder, George Gallup, Philip M. Hauser, Carl I. Hovland, Paul F. Lazarsfeld, Rensis Likert, D. B. Lucas, Elmo Roper, Walter A. Shewhart, Frank Stanton, C. L. Warwick.

mate the population of France from the birth registers. Crude estimates for the principal farm crops in the United States were obtained more than half a century ago from the reports of a sample of correspondents. In the last hundred years engineers and merchants developed various methods of sampling materials, coal, ore deposits, and manufactured goods. Economists took samples of prices to compute index numbers. Statistics of employment, wage rates, industrial production, sales, and other economic series were built up from samples of reporting firms. These methods rested on custom, common sense, and rule of thumb. About twenty years ago the first substantial beginnings of modem sampling methods began to emerge from social surveys in England and America, agricultural experiments in England, America and India, and market research and engineering in America. Many instances of the progressive evolution of the techniques and their adjustment to particular needs might be cited. For example, in 1930, the SSRC sponsored the preparation of a detailed plan for a study of family consumption at different income levels; this plan contained a unique sampling procedure keyed to the research problems that were of central importance in the study. During the mid 1930'S the WPA program included large-scale sample surveys of real property, work relief, unemployment, health, family income and expenditures, retail prices, and other subjects. At approximately the same time the Gallup, Roper, Crossley and other public opinion polls were launched with improved sampling methods based on quota controls. The Department of Agriculture and 1 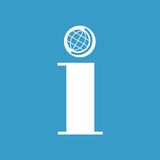