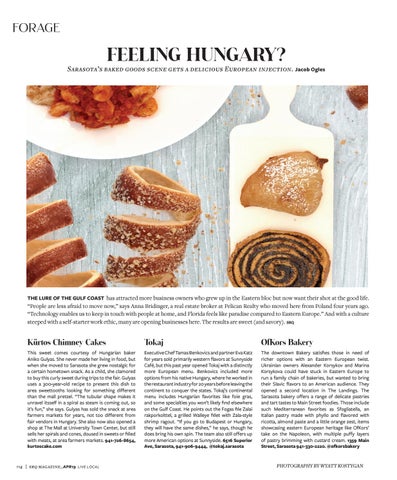 THE LURE OF THE GULF COAST has attracted more business owners who grew up in the Eastern bloc but now want their shot at the good life.

“People are less afraid to move now,” says Anna Bridinger, a real estate broker at Pelican Realty who moved here from Poland four years ago. “Technology enables us to keep in touch with people at home, and Florida feels like paradise compared to Eastern Europe.” And with a culture steeped with a self-starter work ethic, many are opening businesses here. The results are sweet (and savory). SRQ

This sweet comes courtesy of Hungarian baker Aniko Gulyas. She never made her living in food, but when she moved to Sarasota she grew nostalgic for a certain hometown snack. As a child, she clamored to buy this curly sweet during trips to the fair. Gulyas uses a 300-year-old recipe to present this dish to area sweettooths looking for something different than the mall pretzel. “The tubular shape makes it unravel itsself in a spiral as steam is coming out, so it’s fun,” she says. Gulyas has sold the snack at area farmers markets for years, not too different from fair vendors in Hungary. She also now also opened a shop at The Mall at University Town Center, but still sells her spirals and cones, doused in sweets or filled with meats, at area farmers markets. 941-726-8654,

Executive Chef Tamas Benkovics and partner Eva Katz for years sold primarily western flavors at Sunnyside Café, but this past year opened Tokaj with a distinctly more European menu. Benkovics included more options from his native Hungary, where he worked in the restaurant industry for 20 years before leaving the continent to conquer the states. Tokaj’s continental menu includes Hungarian favorites like foie gras, and some specialties you won’t likely find elsewhere on the Gulf Coast. He points out the Fogas file Zalai rakporkolttel, a grilled Walleye fillet with Zala-style shrimp ragout. “If you go to Budapest or Hungary, they will have the same dishes,” he says, though he does bring his own spin. The team also still offers up more American options at Sunnyside. 6516 Superior

The downtown Bakery satisfies those in need of richer options with an Eastern European twist. Ukrainian owners Alexander Korsykov and Marina Korsykova could have stuck in Eastern Europe to run a family chain of bakeries, but wanted to bring their Slavic flavors to an American audience. They opened a second location in The Landings. The Sarasota bakery offers a range of delicate pastries and tart tastes to Main Street foodies. Those include such Mediterranean favorites as Sfogliatella, an Italian pastry made with phyllo and flavored with ricotta, almond paste and a little orange zest, items showcasing eastern European heritage like OfKors’ take on the Napoleon, with multiple puffy layers of pastry brimming with custard cream. 1359 Main

Dive into the Annual Best of SRQ Local Readers Competition this April as we celebrate our favorite places, experiences, people and things. SRQ Magazine | Love Local is the hometown city regional publication of the Creative Coast of Florida, Sarasota and Bradenton Area—transforming what it means to love local through powerful content, contemporary design and authentic stories. 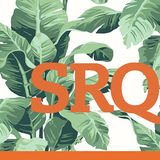