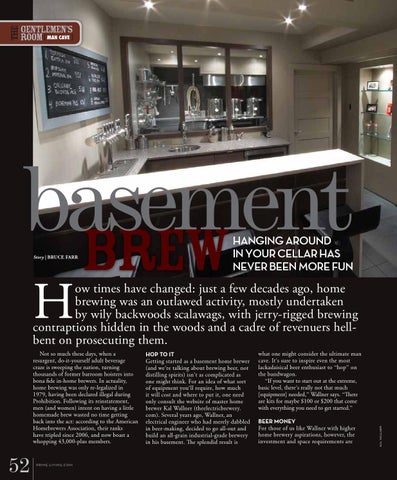 HANGING AROUND IN YOUR CELLAR HAS NEVER BEEN MORE FUN

ow times have changed: just a few decades ago, home brewing was an outlawed activity, mostly undertaken by wily backwoods scalawags, with jerry-rigged brewing contraptions hidden in the woods and a cadre of revenuers hellbent on prosecuting them.

HOP TO IT Getting started as a basement home brewer (and we’re talking about brewing beer, not distilling spirits) isn’t as complicated as one might think. For an idea of what sort of equipment you’ll require, how much it will cost and where to put it, one need only consult the website of master home brewer Kal Wallner (theelectricbrewery. com). Several years ago, Wallner, an electrical engineer who had merely dabbled in beer-making, decided to go all-out and build an all-grain industrial-grade brewery in his basement. The splendid result is

what one might consider the ultimate man cave. It’s sure to inspire even the most lackadaisical beer enthusiast to “hop” on the bandwagon. “If you want to start out at the extreme, basic level, there’s really not that much [equipment] needed,” Wallner says. “There are kits for maybe $100 or $200 that come with everything you need to get started.” BEER MONEY For those of us like Wallner with higher home brewery aspirations, however, the investment and space requirements are

Not so much these days, when a resurgent, do-it-yourself adult beverage craze is sweeping the nation, turning thousands of former barroom hoisters into bona fide in-home brewers. In actuality, home brewing was only re-legalized in 1979, having been declared illegal during Prohibition. Following its reinstatement, men (and women) intent on having a little homemade brew wasted no time getting back into the act: according to the American Homebrewers Association, their ranks have tripled since 2006, and now boast a whopping 43,000-plus members.