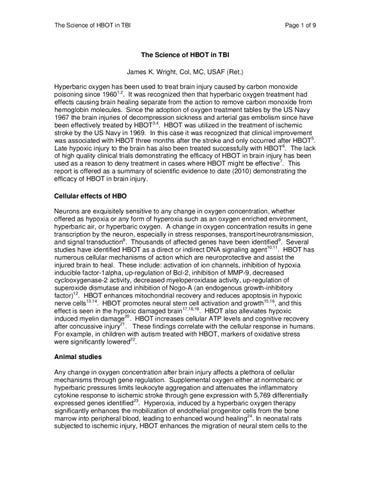 The Science of HBOT in TBI James K. Wright, Col, MC, USAF (Ret.) Hyperbaric oxygen has been used to treat brain injury caused by carbon monoxide poisoning since 19601,2. It was recognized then that hyperbaric oxygen treatment had effects causing brain healing separate from the action to remove carbon monoxide from hemoglobin molecules. Since the adoption of oxygen treatment tables by the US Navy 1967 the brain injuries of decompression sickness and arterial gas embolism since have been effectively treated by HBOT3,4. HBOT was utilized in the treatment of ischemic stroke by the US Navy in 1969. In this case it was recognized that clinical improvement was associated with HBOT three months after the stroke and only occurred after HBOT5. Late hypoxic injury to the brain has also been treated successfully with HBOT6. The lack of high quality clinical trials demonstrating the efficacy of HBOT in brain injury has been used as a reason to deny treatment in cases where HBOT might be effective7. This report is offered as a summary of scientific evidence to date (2010) demonstrating the efficacy of HBOT in brain injury. Cellular effects of HBO Neurons are exquisitely sensitive to any change in oxygen concentration, whether offered as hypoxia or any form of hyperoxia such as an oxygen enriched environment, hyperbaric air, or hyperbaric oxygen. A change in oxygen concentration results in gene transcription by the neuron, especially in stress responses, transport/neurotransmission, and signal transduction8. Thousands of affected genes have been identified9. Several studies have identified HBOT as a direct or indirect DNA signaling agent10,11. HBOT has numerous cellular mechanisms of action which are neuroprotective and assist the injured brain to heal. These include: activation of ion channels, inhibition of hypoxia inducible factor-1alpha, up-regulation of Bcl-2, inhibition of MMP-9, decreased cyclooxygenase-2 activity, decreased myeloperoxidase activity, up-regulation of superoxide dismutase and inhibition of Nogo-A (an endogenous growth-inhibitory factor)12. HBOT enhances mitochondrial recovery and reduces apoptosis in hypoxic nerve cells13,14. HBOT promotes neural stem cell activation and growth15,16, and this effect is seen in the hypoxic damaged brain17,18,19. HBOT also alleviates hypoxic induced myelin damage20. HBOT increases cellular ATP levels and cognitive recovery after concussive injury21. These findings correlate with the cellular response in humans. For example, in children with autism treated with HBOT, markers of oxidative stress were significantly lowered22. Animal studies Any change in oxygen concentration after brain injury affects a plethora of cellular mechanisms through gene regulation. Supplemental oxygen either at normobaric or hyperbaric pressures limits leukocyte aggregation and attenuates the inflammatory cytokine response to ischemic stroke through gene expression with 5,769 differentially expressed genes identified23. Hyperoxia, induced by a hyperbaric oxygen therapy significantly enhances the mobilization of endothelial progenitor cells from the bone marrow into peripheral blood, leading to enhanced wound healing24. In neonatal rats subjected to ischemic injury, HBOT enhances the migration of neural stem cells to the

While the healing effects of HBOT in the acute treatment of decompression illness have been known for decades, the condition of the injured brain after the acute phase of illness was thought to be more or less â&amp;#x20AC;&amp;#x153;permanentâ&amp;#x20AC;?32. However, Harch et al have demonstrated the efficacy of HBOT at 1.5 ATA (HBOT 1.5) in healing decompression sickness brain injury late after injury in the chronic phase of illness33,34,35,36. Importantly, clinically stable divers with residual brain injury from decompression sickness had a significant positive response to HBOT 1.5, even when their condition was thought to be unchangeable37. HBOT has been shown to be clinically effective in mediating the effects of brain injury38. A number of clinicians have demonstrated that HBOT 1.5, when used late after brain injury from a variety of causes (cerebral palsy, hypoxia, carbon monoxide, drowning, and stroke) is capable of promoting clinical improvement. The number of reports and cases demonstrating the repeatedly beneficial effects of HBOT 1.5, when applied late after initial brain injury, makes it seem quite unlikely that these effects are mere chance39,40,41,42,43,44,45,46,47,48,49. Stroke Since the 1960s HBOT has been used in the treatment of stroke50. HBOT 1.5 has been applied to patients with chronic stroke51, often with dramatic improvement. In acute stroke HBOT has been shown to be effective52. Conducting controlled clinical trials on acute stroke patients is difficult and studies have had to be terminated before efficacy or lack thereof could be proven53. HBOT appears to support hypoxic areas of the brain acutely after stroke and it has been used to identify patients who would benefit from surgical intervention54. There are individual case reports of the use of HBOT for stroke with success55. As with other brain injuries the provision of HBOT at pressures greater than 1.5 ATA may be harmful56. Some clinical trials of HBOT in stroke have failed to show efficacy, probably as a result of delay in receiving treatment, small sample sizes, and the use of excessive (&gt; HBOT 1.5) chamber pressures as well as the use of pressurized air (shown to have neurologic effects) as a control57. HBOT has been used efficaciously in stroke to promote neuroprotection and recovery58. And it has dramatic results in stroke caused by air emboli59. Long term HBOT has shown promise as a treatment for ischemic stroke60. Traumatic brain injury (TBI) Recent research has demonstrated the efficacy of HBOT for traumatic brain injury, even

when administered years after injury. In acute severe TBI HBOT has been shown to be effective in reducing mortality61. Harch et al. demonstrated consistent SPECT brain imaging improvements (showing improved brain blood flow) in chronic TBI patients treated with HBOT 1.562,63,64,65. Since the original work of Dr. Neubauer and Harch, the efficacy of HBOT 1.5 in stable TBI has been well documented66,67. Patients with abnormal SPECT scans showing brain blood flow in TBI show consistent improvement after HBOT 1.568. To date Dr. Harch has treated more than 60 TBI patients with HBOT 1.5 showing consistent, and sometimes dramatic, clinically relevant improvements (personal communication). Using the identical HBOT 1.5 protocol in an unrelated center in Florida, Dr. Eddie Zant has achieved similar results - improvement in all of 13 military and former military TBI patients. Many patients were unable to work in their military occupations or to attend college. All those working were able to retain their military or civilian jobs and those who had dropped out of college courses were able to resume their studies after treatment (see attached spreadsheet, courtesy Dr. Eddie Zant). Table: Dr. Eddie Zant HBOT 1.5 TBI results Age

Similarly, Dr. Harch recently reported dramatic improvement in a series of 15 patients treated with HBOT 1.5 in a clinical trial of military acquired TBI 69. Recent reports have also shown promising results for HBOT 1.5 for blast related TBI in the War on Terror70; in two airmen with pre injury neuropsychiatric testing and chronic stable TBI symptoms, HBOT 1.5 resulted in resolution of symptoms as well as a return to the pre-injury values for testing71. In a randomized controlled trial of stable severe TBI treated with HBOT 1.5 Lin et al. demonstrated improvement in the Glasgow Coma Scale72. Rockswold has demonstrated improvement in the Glasgow Coma Scale and reduced mortality in acute TBI patients undergoing HBOT with minimal risk73,74. HBOT 1.5 in this group of acute patients appears safe and does not produce oxygen toxicity75. Other individual trials also have demonstrated the efficacy of HBOT 1.5 for chronic stable TBI76. A 310 patient Chinese trial demonstrated improvement clinically, in neuropsychiatric testing, as well as in SPECT scans after HBOT 1.577. In a randomized controlled trial of 21 brain injured adults, HBOT 1.5 resulted in improved neuropsychiatric testing for the treated group78. Summary The treatment of traumatic brain injury with hyperbaric oxygen is evolving rapidly. A plethora of cellular studies demonstrate the mechanisms of favorable action of HBOT. Animal studies demonstrate the almost universal utility of HBOT for a variety of traumatic and ischemic brain injuries. Hundreds of patients have benefited from HBOT for brain injury. Controlled randomized clinical trials have demonstrated efficacy of HBOT for traumatic brain injury.