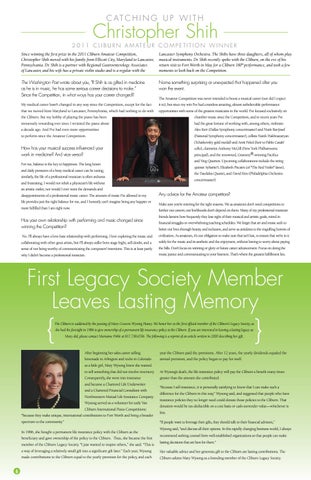 2 0 1 1 C L I B U R N A M AT E U R C O M P E T I T I O N W I N N E R Since winning the first prize in the 2011 Cliburn Amateur Competition, Christopher Shih moved with his family from Ellicott City, Maryland to Lancaster, Pennsylvania. Dr. Shih is a partner with Regional Gastroenterology Associates of Lancaster, and his wife has a private violin studio and is a regular with the

Lancaster Symphony Orchestra. The Shihs have three daughters, all of whom play musical instruments. Dr. Shih recently spoke with the Cliburn, on the eve of his return visit to Fort Worth in May for a Cliburn 180° performance, and took a few moments to look back on the Competition.

The Washington Post wrote about you, &quot;If Shih is as gifted in medicine as he is in music, he has some serious career decisions to make.” Since the Competition, in what ways has your career changed?

Name something surprising or unexpected that happened after you won the event.

My medical career hasn&#39;t changed in any way since the Competition, except for the fact

it to), but since my win I&#39;ve had countless amazing, almost unbelievable performance

that we moved from Maryland to Lancaster, Pennsylvania, which had nothing to do with

opportunities with some of the greatest musicians in the world. I&#39;ve focused exclusively on

the Cliburn. But my hobby of playing the piano has been

chamber music since the Competition, and in recent years I&#39;ve

immensely rewarding ever since I revisited the piano about

had the great fortune of working with, among others, violinists

a decade ago. And I&#39;ve had even more opportunities

to perform since the Amateur Competition.

How has your musical success influenced your work in medicine? And vice versa?

For me, balance is the key to happiness. The long hours

and daily pressures of a busy medical career can be taxing;

similarly, the life of a professional musician is often arduous

and frustrating. I would not relish a physician&#39;s life without an artistic outlet, nor would I ever want the demands and disappointments of a professional music career. The amount of music I&#39;ve allowed in my life provides just the right balance for me, and I honestly can&#39;t imagine being any happier or more fulfilled than I am right now.

Any advice for the Amateur competitors? Make sure you&#39;re entering for the right reasons. We as amateurs don&#39;t need competitions to further our careers; our livelihoods don&#39;t depend on them. Many of my professional musician

Has your own relationship with performing and music changed since winning the Competition?

friends lament how frequently they lose sight of their musical and artistic goals, mired in financial struggles or overwhelming teaching schedules. We forget that art and music seek to better our lives through beauty and inclusion, and serve as antidotes to the engulfing horrors of

No. I&#39;ll always have a love-hate relationship with performing. I love exploring the music and

collaborating with other great artists, but I&#39;ll always suffer from stage fright, self-doubt, and a

solely for the music and its aesthetic and the enjoyment, without having to worry about paying

sense of not being worthy of communicating the composers&#39; intentions. This is at least partly

the bills. Don&#39;t focus on winning or glory or future career advancement. Focus on doing the

why I didn&#39;t become a professional musician.

music justice and communicating to your listeners. That&#39;s where the greatest fulfillment lies.

The Cliburn is saddened by the passing of Mary Cravens Wysong Haney. We honor her as the first official member of the Cliburn’s Legacy Society, as she had the foresight in 1986 to give ownership of a permanent life insurance policy to the Cliburn. If you are interested in leaving a lasting legacy as Mary did, please contact Marianne Pohle at 817.738.6536. The following is a reprint of an article written in 2000 describing her gift.

After beginning her sales career selling

year the Cliburn paid the premiums. After 12 years, the yearly dividends equaled the

lemonade in Arlington and rocks in Colorado

annual premium, and the policy began to pay for itself.

as a little girl, Mary Wysong knew she wanted to sell something that did not involve inventory.

At Wysong’s death, the life insurance policy will pay the Cliburn a benefit many times

Consequently, she went into insurance

greater than the amount she contributed.

and became a Chartered Life Underwriter and a Chartered Financial Consultant with Northwestern Mutual Life Insurance Company. Wysong served as a volunteer for early Van Cliburn International Piano Competitions: “because they make unique, international contributions to Fort Worth and bring a broader spectrum to the community.” In 1986, she bought a permanent life insurance policy with the Cliburn as the beneficiary and gave ownership of the policy to the Cliburn. Thus, she became the first member of the Cliburn Legacy Society. “I just wanted to inspire others,” she said. “This is

“Because I sell insurance, it is personally satisfying to know that I can make such a difference for the Cliburn in this way,” Wysong said, and suggested that people who have insurance policies they no longer need could donate those policies to the Cliburn. That donation would be tax-deductible on a cost basis or cash-surrender value—whichever is less. “If people want to leverage their gifts, they should talk to their financial advisors,” Wysong said, “and discuss all their options. In this rapidly changing business world, I always recommend seeking counsel from well-established organizations so that people can make lasting decisions that are best for them.”

a way of leveraging a relatively small gift into a significant gift later.” Each year, Wysong

Her valuable advice and her generous gift to the Cliburn are lasting contributions. The

made contributions to the Cliburn equal to the yearly premium for the policy, and each

Cliburn salutes Mary Wysong as a founding member of the Cliburn Legacy Society.