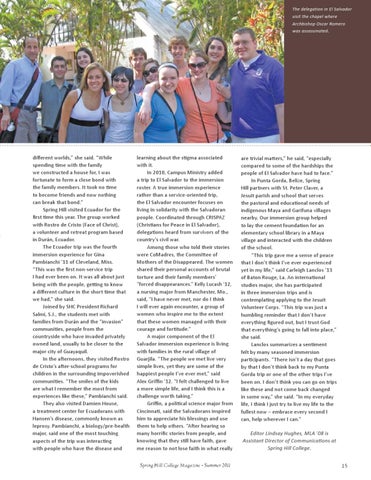 The delegation in El Salvador visit the chapel where Archbishop Oscar Romero was assassinated.

different worlds,” she said. “While spending time with the family we constructed a house for, I was fortunate to form a close bond with the family members. It took no time to become friends and now nothing can break that bond.” Spring Hill visited Ecuador for the first time this year. The group worked with Rostro de Cristo (Face of Christ), a volunteer and retreat program based in Durán, Ecuador. The Ecuador trip was the fourth immersion experience for Gina Pambianchi ’11 of Cleveland, Miss. “This was the first non-service trip I had ever been on. It was all about just being with the people, getting to know a different culture in the short time that we had,” she said. Joined by SHC President Richard Salmi, S.J., the students met with families from Durán and the “invasion” communities, people from the countryside who have invaded privately owned land, usually to be closer to the major city of Guayaquil. In the afternoons, they visited Rostro de Cristo’s after-school programs for children in the surrounding impoverished communities. “The smiles of the kids are what I remember the most from experiences like these,” Pambianchi said. They also visited Damien House, a treatment center for Ecuadorans with Hansen’s disease, commonly known as leprosy. Pambianchi, a biology/pre-health major, said one of the most touching aspects of the trip was interacting with people who have the disease and

learning about the stigma associated with it. In 2010, Campus Ministry added a trip to El Salvador to the immersion roster. A true immersion experience rather than a service-oriented trip, the El Salvador encounter focuses on living in solidarity with the Salvadoran people. Coordinated through CRISPAZ (Christians for Peace in El Salvador), delegations heard from survivors of the country’s civil war. Among those who told their stories were CoMadres, the Committee of Mothers of the Disappeared. The women shared their personal accounts of brutal torture and their family members’ “forced disappearances.” Kelly Lucash ’12, a nursing major from Manchester, Mo., said, “I have never met, nor do I think I will ever again encounter, a group of women who inspire me to the extent that these women managed with their courage and fortitude.” A major component of the El Salvador immersion experience is living with families in the rural village of Guarjila. “The people we met live very simple lives, yet they are some of the happiest people I’ve ever met,” said Alex Griffin ’12. “I felt challenged to live a more simple life, and I think this is a challenge worth taking.” Griffin, a political science major from Cincinnati, said the Salvadorans inspired him to appreciate his blessings and use them to help others. “After hearing so many horrific stories from people, and knowing that they still have faith, gave me reason to not lose faith in what really Spring Hill College Magazine • Summer 2011

are trivial matters,” he said, “especially compared to some of the hardships the people of El Salvador have had to face.” In Punta Gorda, Belize, Spring Hill partners with St. Peter Claver, a Jesuit parish and school that serves the pastoral and educational needs of indigenous Maya and Garifuna villages nearby. Our immersion group helped to lay the cement foundation for an elementary school library in a Maya village and interacted with the children of the school. “This trip gave me a sense of peace that I don’t think I’ve ever experienced yet in my life,” said Carleigh Lanclos ’13 of Baton Rouge, La. An international studies major, she has participated in three immersion trips and is contemplating applying to the Jesuit Volunteer Corps. “This trip was just a humbling reminder that I don’t have everything figured out, but I trust God that everything’s going to fall into place,” she said. Lanclos summarizes a sentiment felt by many seasoned immersion participants. “There isn’t a day that goes by that I don’t think back to my Punta Gorda trip or one of the other trips I’ve been on. I don’t think you can go on trips like these and not come back changed in some way,” she said. “In my everyday life, I think I just try to live my life to the fullest now – embrace every second I can, help wherever I can.” Editor Lindsay Hughes, MLA ’08 is Assistant Director of Communications at Spring Hill College. 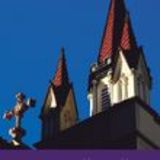