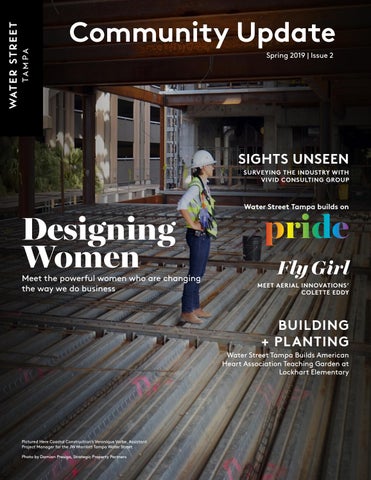 Progress highlights Transformation of the existing structure at Sparkman Wharf is underway. The ground floor will accommodate approximately 10 new retail establishments, while the second floor will welcome 150,000 square feet of leasable creative office space. Channelside Drive has been narrowed for connectivity to the rest of the neighborhood. Sparkman Wharf has extended its hours, now open Tuesday-Sunday from 11 a.m. â&amp;#x20AC;&amp;#x201C; 11 p.m. Chillers and pumps have been installed in the neighborhoodâ&amp;#x20AC;&amp;#x2122;s District Cooling Plant, with completion anticipated by late summer 2019. The recently renamed Tampa Marriott Water Street opened two new food and beverage outlets. This includes a new Starbucks, and Garrison Tavern, the first concept by world renowned Chef Richard Sandoval. The City of Tampa successfully approved the rename of Old Water Street to Water Street.

Construction and design have always intrigued me. It was only natural that I further pursued these interests at an engineering school, where I was surprised to find the male to female ratio was 6:1. It was then that I realized that this was an unexpected career choice for a woman, which was only affirmed as I continued down this path.

While the presence of women in my chosen career has been minimal, those I have encountered are some of the most passionate and inspiring personalities I know. In my current role, I oversee the roadway and infrastructure work for Water Street Tampa. We are presently working on the final stage of the master infrastructure work, laying the foundation for the future fully connected street grid. This stage includes upgraded and enhanced utilities that will support the initial phase of Water Street Tampa. Upon completion, the improved roadway network will provide

SPP has built a strong team in order to successfully execute on this transformative vision.

Each quarter, an SPP team member will provide a Water Street Tampa update and share their unique perspective with the community

Going vertical with Coastal Construction Over the last few months, Coastal continues to make significant progress toward the Water Street Tampa vision, with two projects out of the ground and several more in the works.

JW Marriott Work is well underway on the JW Marriott Tampa Water Street, including the hotel tower concrete frame with the 16th floor placed and the convention center structural steel nearly 50 percent framed. The project is comprised of over 4.4 million pounds of steel. It continues to grow floor by floor each

week, tracking towards topping out its 27 floors by the end of this summer.

As the procurement process moves

forward, Coastal continues to prioritize the

Center—is complete and transitioning to

pours to set the building’s foundation are

Street is approaching a 15 percent utilization

ongoing, with the initial structural lifts of

rate for diverse firms, and the 815 Water

columns in progress. The centralized tripod

Street project has gained interest from

structure, known as the “tree column,” that

small, local businesses, several of which

supports parking for both towers as well as

the grocer, has a projected completion of

event hosted in conjunction with Water

Local participation: Diversity and inclusion update On March 19, 2019, subcontractors gathered for an outreach event for 815 Water Street at Armature Works focusing primarily on mechanical, electrical, structure, and shell trades. The goal of these events is to connect diverse businesses directly with major prime subcontractors for the initial phase of work on the Water Street Tampa project.

There was an impressive representation of diverse subcontractors with an average of four per each of the 14 trades at the event.

Kenneth Stewart of the African Americanowned firm, Integrated Security Consultants, spoke to the opportunities that can come from attending these events. “In spite of our local and national successes, we have had difficulties finding opportunities with local major projects here in Tampa,” he said. “That was not the case with the Water Street Tampa project. From the first outreach meeting we attended, we found contractors and subcontractors that were eager to work with us and get us involved in various aspects of the project.” Over the next year, construction on Water Street Tampa will continue to increase with new projects breaking ground. There will be several additional opportunities for local subcontractors to get involved.

For information on upcoming events or to simply learn more about opportunities with Water Street Tampa, please connect with Strategist Project Support Services at otdelancy@strategistsupport.com.

Foundation Corp. and Coastal Construction for the 815 Water Street project. Over the course of their four-month contract,

Although Mercedes Young is originally from

work was necessary in order for this building

Panama, you would never guess based on

to progress towards vertical construction.

her tightly woven relationships throughout the Tampa Bay community.

Young is a member of the Hispanic Professional Women’s Association,

After one visit in 2007, Young was convinced

that Tampa would be a great place to

Officials, and serves on the board for the

National Association of Black Women in

the successful civil engineering and land

surveying company, Vivid Consulting Group. “Being a business owner and an engineer The company currently has 12 employees

requires a wide variety of skill sets, and you

and 15 active contracts in Tampa and

have to be able to multitask to keep up,”

Orlando every month - and isn’t looking to

Young said. “Having the support of other

slow down any time soon.

women in the community makes it easier.”

Vivid Consulting Group was chosen as the

When asked about new contracts, Young

surveyor of choice to work alongside BAUER

explained the importance of aligning philosophies, focusing on projects that will benefit the community and doing work that will have a lasting impact. In addition to Vivid’s work with Water Street Tampa, Vivid has contributed to Tampa International Airport, Moffitt Cancer Center, the City of Tampa, and more.

“There’s a sense of pride when you build something so impactful. You can drive by it and say ‘I was a part of that. I was there.’” Mercedes Young, CEO, Vivid Consulting Group

“I have found over the years that relationships have truly been the building blocks of this business, especially given that it is so niche in nature,” said Eddy. Though this started out as a flight-focused aerial photography company, Eddy has

which are also women-owned.

focused her efforts on keeping up with the

Eddy graduated from University of

of her organization in addition to growing

industry trends, building out the drone side her helicopter portfolio substantially. Eddy and her team have played a significant role

photography company out of Tampa.

in documenting the initial growth of Water

Although this provided her with a solid

foundation of the industry, when Eddy

Street Tampa, capturing the creation of the construction.

opened her business in 1987, she still had no technical training in the photography side of the business. Determined to be self-sufficient and master all verticals of the business, Eddy decided to teach herself. It was a slow start with only two jobs out of Tampa, but it rapidly expanded to Sarasota, Lakeland, followed by the rest of Florida. Today, with over 15 contracted helicopter flights per month, she has found herself shooting everything from roller coasters at Busch Gardens to construction on the Water Street Tampa project.

“We’re so happy to be working alongside a company with such a strong mission to help the community,” said Amber Hubbard at the American Heart Association.

In February, SPP team members joined school staff, students and parents for “Build Day” to assemble planters, followed by a “Plant Day,” where the team assisted students with planting a wide variety of fruits and vegetables. To make this a more interactive and fun experience for the students, there were pizza and salsa-themed gardens, including tomatoes, basil, eggplant and peppers. The Teaching Garden will be an hands-on tool for educating Lockhart students on the importance of nutrition and healthy eating. Looking forward, Lockhart will be hosting a night for STEAM (science, technology, engineering, arts, mathematics). For the arts portion of the night, students will be painting the various planters from the Teaching Garden, encouraging artistic expression and creativity. Following the painting, the last step in the process will be the “Harvest Day” where students will be

In addition to supporting and participating in the parade, Sparkman Wharf hosted the first annual Tampa Pride Tea Dance, a traditional day-after-Pride celebration of

to sponsor and walk in the Fifth Annual Tampa Pride parade in Ybor City. The team

The day was a tremendous success,

hosted by Chef Art Smith as well as live

music all afternoon, including a surprise performance by pop artist Betty Who.