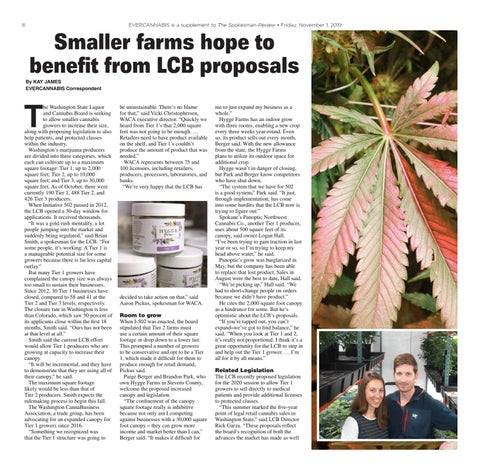 evercannabis is a supplement to The Spokesman-Review • Friday, November 1, 2019

he Washington State Liquor and Cannabis Board is seeking to allow smaller cannabis growers to increase their size, along with proposing legislation to also help patients, and protected classes within the industry. Washington’s marijuana producers are divided into three categories, which each can cultivate up to a maximum square footage: Tier 1, up to 2,000 square feet; Tier 2, up to 10,000 square feet; and Tier 3, up to 30,000 square feet. As of October, there were currently 190 Tier 1, 488 Tier 2, and 426 Tier 3 producers. When Initiative 502 passed in 2012, the LCB opened a 30-day window for applications. It received thousands. “It was a gold rush mentality, a lot people jumping into the market and suddenly being regulated,” said Brian Smith, a spokesman for the LCB. “For some people, it’s working. A Tier 1 is a manageable potential size for some growers because there is far less capital outlay.” But many Tier 1 growers have complained the canopy size was always too small to sustain their businesses. Since 2012, 30 Tier 1 businesses have closed, compared to 58 and 41 at the Tier 2 and Tier 3 levels, respectively. The closure rate in Washington is less than Colorado, which saw 50 percent of its applicants close within the first 18 months, Smith said. “Ours has not been at that level at all.” Smith said the current LCB effort would allow Tier 1 producers who are growing at capacity to increase their canopy. “It will be incremental, and they have to demonstrate that they are using all of their canopy,” he said. The maximum square footage likely would be less than that of Tier 2 producers. Smith expects the rulemaking process to begin this fall. The Washington CannaBusiness Association, a trade group, has been advocating for an expanded canopy for Tier 1 growers since 2016. “Something we recognized was that the Tier 1 structure was going to

be unsustainable. There’s no blame for that,” said Vicki Christophersen, WACA executive director. “Quickly we heard from Tier 1’s that 2,000 square feet was not going to be enough. … Retailers need to have product available on the shelf, and Tier 1’s couldn’t produce the amount of product that was needed.” WACA represents between 75 and 100 licensees, including retailers, producers, processors, laboratories, and banks. “We’re very happy that the LCB has

decided to take action on that,” said Aaron Pickus, spokesman for WACA. Room to grow When I-502 was enacted, the board stipulated that Tier 2 farms must use a certain amount of their square footage or drop down to a lower tier. This prompted a number of growers to be conservative and opt to be a Tier 1, which made it difficult for them to produce enough for retail demand, Pickus said. Paige Berger and Brandon Park, who own Hygge Farms in Stevens County, welcome the proposed increased canopy and legislation. “The confinement of the canopy square footage really is inhibitive because not only am I competing against businesses with a 30,000 square foot canopy – they can grow more income and market better than I can,” Berger said. “It makes it difficult for

me to just expand my business as a whole.” Hygge Farms has an indoor grow with three rooms, enabling a new crop every three weeks year-round. Even so, its product sells out every month, Berger said. With the new allowance from the state, the Hygge Farms plans to utilize its outdoor space for additional crop. Hygge wasn’t in danger of closing, but Park and Berger know competitors who have shut down. “The system that we have for 502 is a good system,” Park said. “It just, through implementation, has come into some hurdles that the LCB now is trying to figure out.” Spokane’s Panoptic Northwest Cannabis Co., another Tier 1 producer, uses about 500 square feet of its canopy, said owner Logan Hall. “I’ve been trying to gain traction in last year or so, so I’m trying to keep my head above water,” he said. Panoptic’s grow was burglarized in May, but the company has been able to replace that lost product. Sales in August were the best to date, Hall said. “We’re picking up,” Hall said. “We had to short-change people on orders because we didn’t have product.” He cites the 2,000 square foot canopy as a hindrance for some. But he’s optimistic about the LCB’s proposals. “If you’re tapped out, you can’t expand–we’ve got to find balance,” he said. “When you look at Tier 1 and 2, it’s really not proportional. I think it’s a great opportunity for the LCB to step in and help out the Tier 1 grower. … I’m all for it by all means.” Related Legislation The LCB recently proposed legislation for the 2020 session to allow Tier 1 growers to sell directly to medical patients and provide additional licenses to protected classes. “This summer marked the five-year point of legal retail cannabis sales in Washington State,” said LCB Director Rick Garza. “These proposals reflect the board’s recognition of both the advances the market has made as well

Guide to marijuana in Washington State. 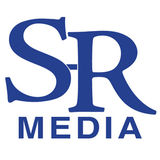