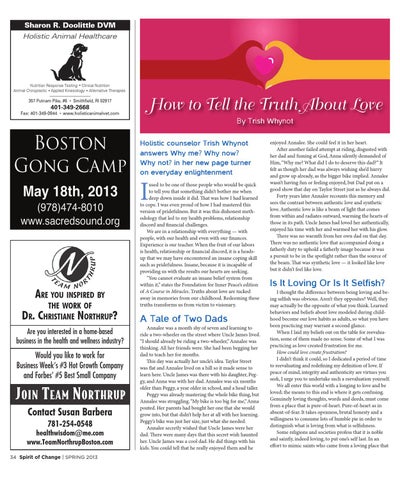 How to Tell the Truth About Love

By Trish Whynot Holistic counselor Trish Whynot answers Why me? Why now? Why not? in her new page turner on everyday enlightenment

ARE YOU INSPIRED BY

THE WORK OF DR. CHRISTIANE NORTHRUP? Are you interested in a home-based business in the health and wellness industry?

used to be one of those people who would be quick to tell you that something didn’t bother me when deep down inside it did. That was how I had learned to cope. I was even proud of how I had mastered this version of pridefulness. But it was this dishonest methodology that led to my health problems, relationship discord and financial challenges. We are in a relationship with everything — with people, with our health and even with our finances. Experience is our teacher. When the fruit of our labors is health, relationship or financial discord, it is a headsup that we may have encountered an insane coping skill such as pridefulness. Insane, because it is incapable of providing us with the results our hearts are seeking. “You cannot evaluate an insane belief system from within it,” states the Foundation for Inner Peace’s edition of A Course in Miracles. Truths about love are tucked away in memories from our childhood. Redeeming these truths transforms us from victim to visionary.

A Tale of Two Dads Annalee was a month shy of seven and learning to ride a two-wheeler on the street where Uncle James lived. “I should already be riding a two-wheeler,” Annalee was thinking. All her friends were. She had been begging her dad to teach her for months. This day was actually her uncle’s idea. Taylor Street was flat and Annalee lived on a hill so it made sense to learn here. Uncle James was there with his daughter, Peggy, and Anna was with her dad. Annalee was six months older than Peggy, a year older in school, and a head taller. Peggy was already mastering the whole bike thing, but Annalee was struggling. “My bike is too big for me,” Anna pouted. Her parents had bought her one that she would grow into, but that didn’t help her at all with her learning. Peggy’s bike was just her size, just what she needed. Annalee secretly wished that Uncle James were her dad. There were many days that this secret wish haunted her. Uncle James was a cool dad. He did things with his kids. You could tell that he really enjoyed them and he

enjoyed Annalee. She could feel it in her heart. After another failed attempt at riding, disgusted with her dad and fuming at God, Anna silently demanded of Him, “Why me? What did I do to deserve this dad?” It felt as though her dad was always wishing she’d hurry and grow up already, as the bigger bike implied. Annalee wasn’t having fun or feeling enjoyed, but Dad put on a good show that day on Taylor Street just as he always did. Forty years later Annalee recounts this memory and sees the contrast between authentic love and synthetic love. Authentic love is like a beam of light that comes from within and radiates outward, warming the hearts of those in its path. Uncle James had loved her authentically, enjoyed his time with her and warmed her with his glow. There was no warmth from her own dad on that day. There was no authentic love that accompanied doing a fatherly duty to uphold a fatherly image because it was a pursuit to be in the spotlight rather than the source of the beam. That was synthetic love — it looked like love but it didn’t feel like love.

Is It Loving Or Is It Selfish? I thought the difference between being loving and being selfish was obvious. Aren’t they opposites? Well, they may actually be the opposite of what you think. Learned behaviors and beliefs about love modeled during childhood become our love habits as adults, so what you have been practicing may warrant a second glance. When I laid my beliefs out on the table for reevaluation, some of them made no sense. Some of what I was practicing as love created frustration for me. How could love create frustration? I didn’t think it could, so I dedicated a period of time to reevaluating and redefining my definition of love. If peace of mind, integrity and authenticity are virtues you seek, I urge you to undertake such a reevaluation yourself. We all enter this world with a longing to love and be loved; the means to this end is where it gets confusing. Genuinely loving thoughts, words and deeds, must come from a place that is pure-of-heart. Pure-of-heart as in absent-of-fear. It takes openness, brutal honesty and a willingness to consume lots of humble pie in order to distinguish what is loving from what is selfishness. Some religions and societies profess that it is noble and saintly, indeed loving, to put one’s self last. In an effort to mimic saints who came from a loving place that 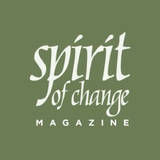