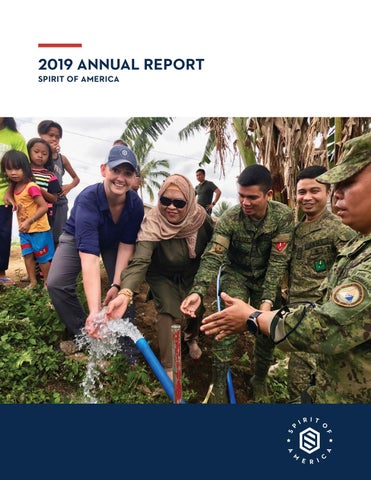 CITIZENS SERVING THE NATION Spirit of America directly contributes to the safety and success of American servicemembers and diplomats on the front lines. We are a nonprofit citizen service organization founded in response to the attacks of 9/11. Our mission is to support the safety and success of Americans serving abroad and the local people and partners they seek to help. We are officially approved by Congress and the Department of Defense to work alongside deployed US troops and provide assistance to meet the local needs they identify. We fill the gaps between what’s needed on the front lines and what government can do. And, with private-sector resources, speed, and flexibility, we deliver exactly the assistance that is needed. Supporting Spirit of America helps those who serve our nation abroad return home safely and proud of their success. Our work saves lives and limbs. We help our troops and diplomats build trust and goodwill, prevent conflict, and strengthen America’s security. In the world’s toughest places, people experience the best of who Americans are and what we stand for.

A MESSAGE FROM OUR CEO

Dear Friends and Supporters, America was founded on citizen service: ordinary Americans doing their part. As it has always been, citizens must participate to secure the blessings of liberty. Spirit of America is citizens serving the nation, committed to America’s freedoms and ideals, working together, and doing our part to support the country and those who serve it. In partnership with our troops and diplomats, we end suffering and prevent conflict, and we build hope and peace. In the world’s toughest places, people experience the best of who Americans are and what we stand for. This is patriotism without politics. Thanks to your support, our impact continues to grow. In 2019, Spirit of America implemented 238 projects. Each project was designed and implemented in direct response to needs identified by US military and Department of State personnel serving abroad. Each project supported the initiative of the local people and partners who are key to the stability of their communities, and ultimately, to the success of US missions abroad. I founded Spirit of America in response to the attacks of 9/11. Since then the threats and challenges to America’s security and freedoms have grown. Terrorism and extremism are still problems. Russia is attacking the stability of America’s friends and partners and undermining our relationships with our allies. China is striving to establish an authoritarian world order with a dark and regressive view of human liberty and dignity. And, there is the coronavirus pandemic that threatens people here at home and around the world. To prevail so that future generations may live and prosper in a free society, we must work together and harness all of America’s strengths. The agility, responsiveness, and capabilities of the private sector must be added to the reach and resources of our government and military. Spirit of America is the only organization that meets this need. Thank you for helping us build goodwill, save lives, and support the brave men and women who serve America abroad so they can return home safe and proud of their success.

DIRECT IMPACT ON MISSION SUCCESS Spirit of America represents a fundamentally better way for the United States to strengthen national security and defend America’s interests and ideals. Each Spirit of America project meets the military’s need for private assistance to do what government can’t and make deployed US troops safer and more successful. We fill the needs US personnel identify: the mission-critical gaps in government resourcing that can only be met through the speed, flexibility, and entrepreneurial approaches of the private sector.

“ Our military is absolutely critical but it can’t do it alone. To prevail, America needs all elements of national power, including our citizens. That’s why I feel so strongly about Spirit of America’s contribution and its unique model of citizen service.” — GENERAL JAMES L. JONES, UNITED STATES MARINE CORPS, RETIRED

Our unprecedented partnership with the US military — recognized by Congress as part of the 2019 National Defense Authorization Act — allows our all-veteran field operations team to work side-by-side with deployed US Special Operations Forces, conventional US military personnel, and Department of State personnel to support high-priority, security-related US missions abroad.

We support US missions in active conflict zones and in undergoverned spaces plagued by extremist threats. In 2019, our primary areas of focus were: Helping US troops and their local partners strengthen security by countering Islamic extremism in the Middle East, Central and Southeast Asia, and Africa › Increasing America’s security and influence in the face of growing challenges from China and Russia in Asia and Eastern Europe › Disrupting the transnational networks threatening the United States in Central and South America ›

supporting US partners and saving lives and limbs

SAVING LIVES AND LIMBS IN IRAQ WITH A K-9 SQUAD The Kurdistan Region of Iraq is plagued by landmines and explosive remnants of war from over 40 years of conflict dating back to the Iran-Iraq War in the 1980s. Starting in 2014, as ISIS rapidly seized large swaths of Iraq, they saturated urban centers and the front lines with improvised explosive devices in an attempt to disrupt coalition forces. This brutal tactic led to mass civilian casualties, disrupted the economy, and undermined local governance. With the fall of the ISIS caliphate, Iraqi Kurdistan finally has the peace and security necessary to begin — US SPECIAL OPERATIONS TEAM SERGEANT clearing landmines and explosive remnants of war from over 240 square miles. The Ministry of Peshmerga established a K-9 unit in 2017 with 18 trained bomb detection dogs, but they lacked the resources to fully employ this critical capability.

“ When everything else fails, Spirit of America always comes to the rescue.”

To help root out the remnants of ISIS and clear war-ravaged northern Iraq of mines and unexploded bombs, Spirit of America partnered with US Army soldiers to outfit the Kurdish Peshmerga’s K-9 bomb disposal squad with lifesaving protective equipment and metal detectors, and life-sustaining food and medicine.

Joshua Brandon, regional program manager for the Middle East and Central Asia and a US Army veteran, spoke about working with US Army soldiers to support the Peshmerga’s K-9 bomb disposal squad on CNN Right Now with Brianna Keilar. Annual Report 2019 | 7

PREVENTING GANG RECRUITMENT THROUGH JOBS IN GUATEMALA Working alongside US Marines in Guatemala, Spirit of America supported vocational training to help prevent the recruitment of vulnerable youth by gangs and narcotraffickers throughout Central America. New equipment for an automotive mechanic course provided legitimate job opportunities for these youth.

RESPONDING TO A TERRORIST ATTACK ON A US BASE IN SOMALIA

On September 30, 2019, a US military base in Somalia was attacked by al Shabaab, whose militants attacked with a car bomb and attempted to breach and storm the US base. The attack was successfully repelled due to the actions of US Special Operations forces, along with Somali and Ugandan partner forces. These partner forces often serve as the first line of defense against attacks but lack many essential supplies. To sustain critical security and stability missions 24 hours after the terrorist attack, Spirit of America supplied lifesaving trauma kits and medical supplies to preserve the lives and limbs of local partners working alongside US forces.

REDUCING EXTREMIST INFLUENCE WITH CLEAN WATER IN THE PHILIPPINES A vulnerable community previously displaced by ISIS in the southern Philippines had to walk two miles roundtrip through rugged, steep terrain to collect a basic need: water. Worse still, with every trip to get water, the civilians risked encountering ISIS fighters, putting them in the direct vicinity of dangerous extremists. To help restore basic services and build trust with this rural village, Spirit of America worked with US Special Operations Forces and their Filipino partners to purchase a water pump to provide clean, potable water to locals.

SAVING LIVES AND STOPPING ISIS FIGHTERS IN SYRIA When US Special Forces in Syria needed emergency food and water for 1,650 families escaping the last areas controlled by ISIS, Spirit of America delivered food assistance in just 96 hours. By improving conditions for these displaced families, US troops and their local partners could focus on the critical task of identifying and capturing ISIS fighters who were — MICHÈLE FLOURNOY, also trying to escape, FORMER UNDER SECRETARY OF DEFENSE FOR POLICY further saving lives.

“ Spirit of America is a whole of nation approach to service that strengthens our national security.”

IMPROVING EDUCATION AND ECONOMIC OPPORTUNITY IN GEORGIA To strengthen America’s partnership with Georgia and counter malign Russian influence, Spirit of America provided walnut tree saplings to a school alongside the Administrative Boundary Line, which borders a Russian-occupied region of Georgia. The saplings provide agricultural training for students and an economic resource for the underfunded school. The trees are also a beautiful, persistent reminder to the community of American friendship.

Jim Hake CEO, Spirit of America Board Member Since 2004

Michèle Flournoy Former Under Secretary of Defense for Policy

Spirit of America is a privately funded 501c3 nonprofit organization. We are supported entirely by private contributions from citizens, foundations, and businesses. We do not receive, and would not accept, government funding. For 2019, total net assets were $9,585,533. Total liabilities and net assets were $9,694,646.

“ In situations that require speed and audacity, Spirit of America has proven over and over again that it can and will help our forces answer an emerging need in order to help prevent a crisis. Spirit of America’s agility and ingenuity fit perfectly with the mission requirements and mindset of Special Operations Forces.” — ADMIRAL ERIC OLSON, US NAVY, RETIRED

3033 Wilson Blvd., Suite 700 Arlington, VA 22201 +1.571.970.1370 spiritofamerica.org SpiritAmerica No endorsement of Spirit of America by the US Department of Defense, Department of State, or US personnel is intended or implied. 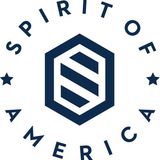 More from Spirit of America