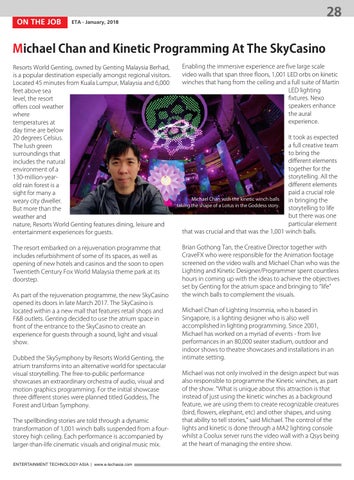 Michael Chan and Kinetic Programming At The SkyCasino Resorts World Genting, owned by Genting Malaysia Berhad, is a popular destination especially amongst regional visitors. Located 45 minutes from Kuala Lumpur, Malaysia and 6,000 feet above sea level, the resort oﬀers cool weather where temperatures at day time are below 20 degrees Celsius. The lush green surroundings that includes the natural environment of a 130-million-yearold rain forest is a sight for many a weary city dweller. But more than the weather and nature, Resorts World Genting features dining, leisure and entertainment experiences for guests. The resort embarked on a rejuvenation programme that includes refurbishment of some of its spaces, as well as opening of new hotels and casinos and the soon to open Twentieth Century Fox World Malaysia theme park at its doorstep. As part of the rejuvenation programme, the new SkyCasino opened its doors in late March 2017. The SkyCasino is located within a a new mall that features retail shops and F&amp;B outlets. Genting decided to use the atrium space in front of the entrance to the SkyCasino to create an experience for guests through a sound, light and visual show. Dubbed the SkySymphony by Resorts World Genting, the atrium transforms into an alternative world for spectacular visual storytelling. The free-to-public performance showcases an extraordinary orchestra of audio, visual and motion graphics programming. For the initial showcase three diﬀerent stories were planned titled Goddess, The Forest and Urban Symphony. The spellbinding stories are told through a dynamic transformation of 1,001 winch balls suspended from a fourstorey high ceiling. Each performance is accompanied by larger-than-life cinematic visuals and original music mix.

Enabling the immersive experience are ﬁve large scale video walls that span three ﬂoors, 1,001 LED orbs on kinetic winches that hang from the ceiling and a full suite of Martin LED lighting ﬁxtures. Nexo speakers enhance the aural experience. It took as expected a full creative team to bring the diﬀerent elements together for the storytelling. All the diﬀerent elements paid a crucial role Michael Chan with the kinetic winch balls in bringing the taking the shape of a Lotus in the Goddess story. storytelling to life but there was one particular element that was crucial and that was the 1,001 winch balls. Brian Gothong Tan, the Creative Director together with CraveFX who were responsible for the Animation footage screened on the video walls and Michael Chan who was the Lighting and Kinetic Designer/Programmer spent countless hours in coming up with the ideas to achieve the objectives set by Genting for the atrium space and bringing to “life” the winch balls to complement the visuals. Michael Chan of Lighting Insomnia, who is based in Singapore, is a lighting designer who is also well accomplished in lighting programming. Since 2001, Michael has worked on a myriad of events - from live performances in an 80,000 seater stadium, outdoor and indoor shows to theatre showcases and installations in an intimate setting. Michael was not only involved in the design aspect but was also responsible to programme the Kinetic winches, as part of the show. “What is unique about this attraction is that instead of just using the kinetic winches as a background feature, we are using them to create recognizable creatures (bird, ﬂowers, elephant, etc) and other shapes, and using that ability to tell stories,” said Michael. The control of the lights and kinetic is done through a MA2 lighting console whilst a Coolux server runs the video wall with a Qsys being at the heart of managing the entire show.

Targeted at the technical and production professionals in Asia. 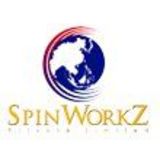