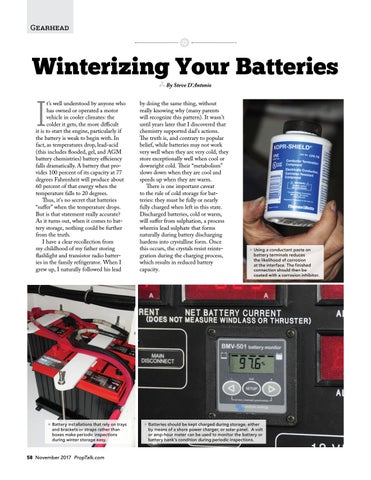 Winterizing Your Batteries By Steve D’Antonio

t’s well understood by anyone who has owned or operated a motor vehicle in cooler climates: the colder it gets, the more difficult it is to start the engine, particularly if the battery is weak to begin with. In fact, as temperatures drop, lead-acid (this includes flooded, gel, and AGM battery chemistries) battery efficiency falls dramatically. A battery that provides 100 percent of its capacity at 77 degrees Fahrenheit will produce about 60 percent of that energy when the temperature falls to 20 degrees. Thus, it’s no secret that batteries “suffer” when the temperature drops. But is that statement really accurate? As it turns out, when it comes to battery storage, nothing could be further from the truth. I have a clear recollection from my childhood of my father storing flashlight and transistor radio batteries in the family refrigerator. When I grew up, I naturally followed his lead

##Battery installations that rely on trays and brackets or straps rather than boxes make periodic inspections during winter storage easy.

by doing the same thing, without really knowing why (many parents will recognize this pattern). It wasn’t until years later that I discovered that chemistry supported dad’s actions. The truth is, and contrary to popular belief, while batteries may not work very well when they are very cold, they store exceptionally well when cool or downright cold. Their “metabolism” slows down when they are cool and speeds up when they are warm. There is one important caveat to the rule of cold storage for batteries: they must be fully or nearly fully charged when left in this state. Discharged batteries, cold or warm, will suffer from sulphation, a process wherein lead sulphate that forms naturally during battery discharging hardens into crystalline form. Once this occurs, the crystals resist reintegration during the charging process, which results in reduced battery capacity.

##Using a conductant paste on battery terminals reduces the likelihood of corrosion at the interface. The finished connection should then be coated with a corrosion inhibitor.

##Batteries should be kept charged during storage, either by means of a shore power charger, or solar panel. A volt or amp-hour meter can be used to monitor the battery or battery bank’s condition during periodic inspections.