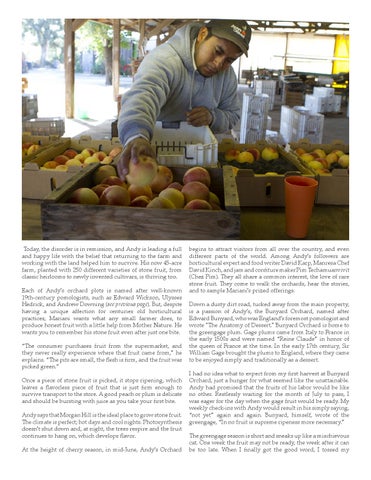 Today, the disorder is in remission, and Andy is leading a full and happy life with the belief that returning to the farm and working with the land helped him to survive. His now 45-acre farm, planted with 250 different varieties of stone fruit, from classic heirlooms to newly invented cultivars, is thriving too. Each of Andy’s orchard plots is named after well-known 19th-century pomologists, such as Edward Wickson, Ulysses Hedrick, and Andrew Downing (see previous page). But, despite having a unique affection for centuries old horticultural practices, Mariani wants what any small farmer does, to produce honest fruit with a little help from Mother Nature. He wants you to remember his stone fruit even after just one bite. “The consumer purchases fruit from the supermarket, and they never really experience where that fruit came from,” he explains. “The pits are small, the flesh is firm, and the fruit was picked green.” Once a piece of stone fruit is picked, it stops ripening, which leaves a flavorless piece of fruit that is just firm enough to survive transport to the store. A good peach or plum is delicate and should be bursting with juice as you take your first bite. Andy says that Morgan Hill is the ideal place to grow stone fruit. The climate is perfect; hot days and cool nights. Photosynthesis doesn’t shut down and, at night, the trees respire and the fruit continues to hang on, which develops flavor. At the height of cherry season, in mid-June, Andy’s Orchard

begins to attract visitors from all over the country, and even different parts of the world. Among Andy’s followers are horticultural expert and food writer David Karp, Manresa Chef David Kinch, and jam and confiture maker Pim Techamuanvivit (Chez Pim). They all share a common interest, the love of rare stone fruit. They come to walk the orchards, hear the stories, and to sample Mariani’s prized offerings. Down a dusty dirt road, tucked away from the main property, is a passion of Andy’s, the Bunyard Orchard, named after Edward Bunyard, who was England’s foremost pomologist and wrote &quot;The Anatomy of Dessert.&quot; Bunyard Orchard is home to the greengage plum. Gage plums came from Italy to France in the early 1500s and were named “Reine Claude” in honor of the queen of France at the time. In the early 17th century, Sir William Gage brought the plums to England, where they came to be enjoyed simply and traditionally as a dessert. I had no idea what to expect from my first harvest at Bunyard Orchard, just a hunger for what seemed like the unattainable. Andy had promised that the fruits of his labor would be like no other. Restlessly waiting for the month of July to pass, I was eager for the day when the gage fruit would be ready. My weekly check-ins with Andy would result in his simply saying, “not yet” again and again. Bunyard, himself, wrote of the greengage, “In no fruit is supreme ripeness more necessary.” The greengage season is short and sneaks up like a mischievous cat. One week the fruit may not be ready, the week after it can be too late. When I finally got the good word, I tossed my 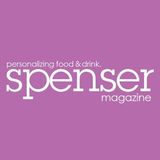