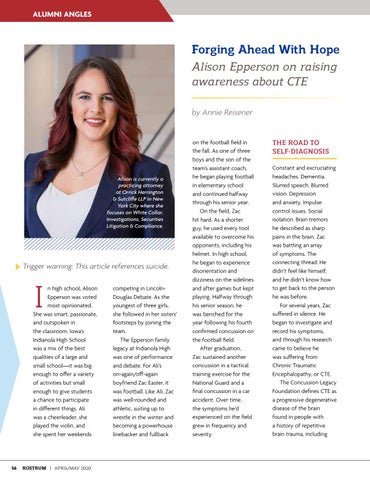 n high school, Alison Epperson was voted most opinionated. She was smart, passionate, and outspoken in the classroom. Iowa’s Indianola High School was a mix of the best qualities of a large and small school—it was big enough to offer a variety of activities but small enough to give students a chance to participate in different things. Ali was a cheerleader, she played the violin, and she spent her weekends

competing in LincolnDouglas Debate. As the youngest of three girls, she followed in her sisters’ footsteps by joining the team. The Epperson family legacy at Indianola High was one of performance and debate. For Ali’s on-again/off-again boyfriend Zac Easter, it was football. Like Ali, Zac was well-rounded and athletic, suiting up to wrestle in the winter and becoming a powerhouse linebacker and fullback

on the football field in the fall. As one of three boys and the son of the team’s assistant coach, he began playing football in elementary school and continued halfway through his senior year. On the field, Zac hit hard. As a shorter guy, he used every tool available to overcome his opponents, including his helmet. In high school, he began to experience disorientation and dizziness on the sidelines and after games but kept playing. Halfway through his senior season, he was benched for the year following his fourth confirmed concussion on the football field. After graduation, Zac sustained another concussion in a tactical training exercise for the National Guard and a final concussion in a car accident. Over time, the symptoms he’d experienced on the field grew in frequency and severity.

THE ROAD TO SELF-DIAGNOSIS Constant and excruciating headaches. Dementia. Slurred speech. Blurred vision. Depression and anxiety. Impulse control issues. Social isolation. Brain tremors he described as sharp pains in the brain. Zac was battling an array of symptoms. The connecting thread: He didn’t feel like himself, and he didn’t know how to get back to the person he was before. For several years, Zac suffered in silence. He began to investigate and record his symptoms, and through his research came to believe he was suffering from Chronic Traumatic Encephalopathy, or CTE. The Concussion Legacy Foundation defines CTE as a progressive degenerative disease of the brain found in people with a history of repetitive brain trauma, including