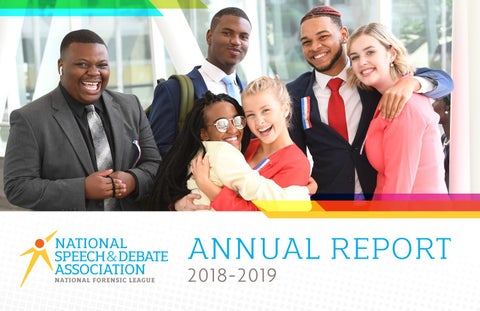 The Academic All American award recognizes high school students who have earned the degree of Superior Distinction (750 points); completed at least five semesters of high school; demonstrated outstanding character and leadership; and earned a GPA of 3.7 on a 4.0 scale (or its equivalent). 2018-2019 ACADEMIC ALL AMERICAN AWARDS

OTHER RECOGNITION STATS SCHOOL, COACH, AND STUDENT AWARDS GIVEN

The Academic All American Award provides students with a feeling of accomplishment and a benchmark for an individual to realize the true extent of their skills and commitment through an achievable yet prestigious honor. Not only does it serve as a gratifying reward for hard work but doubles as a goal for students to strive to achieve throughout their time in speech and debate. For me personally, the AAA award has incentivized me to go to more tournaments and work harder to improve my skills.

Speech and debate has empowered me in so many ways—it taught me how to build and convey stories, it channeled my passion for justice onto an impactful platform, and it taught me both the academic and casual knowledge needed for effective rhetoric. . . When I talk at town halls and on panels, adults are always astonished that a young person like me can speak with so much conviction and confidence. They would probably be surprised to see a whole group of teenagers all over the country that can do the same.

As a student, speech and debate taught me that what made me different, made me special. As a coach, I get to help my students find the joy that comes with being their authentic self. There is no greater gift.

Daniel Hodges, one of the NSDA alums featured in the 2018-2019 Pride Month Poster series, is an assistant speech coach at Apple Valley High School, MN and the Senior Manager of Development Operations of Planned Parenthood North Central States. To view additional inclusion resources, visit our website at: www.speechanddebate.org/inclusion

2018-2019 INCLUSION COMMITMENTS Inspired by recommendations from the NSDA Coaches’ Caucuses and the membership, the NSDA produced best practice documents on safe tournament practices and ways to infuse inclusion into all aspects of speech and debate.

DEBATE CHALLENGED ME TO NOT JUST ACKNOWLEDGE PARTS OF MY GENDER AND SEXUALITY I HAD SUPPRESSED, BUT AFFIRMATIVELY EXPLORE WHAT MY IDENTITY AS A QUEER BLACK WOMAN WAS.

SPEECH AND DEBATE GAVE MY VOICE A PURPOSE.

SPEECH WAS A CONSTANT REMINDER THAT I AM NOT HERE TO SPEAK FOR MYSELF, BUT FOR EVERYONE IN MY COMMUNITY WHO DOES NOT HAVE THE SAME OPPORTUNITY TO BE HEARD.

WE ARE SPEECH &amp; DEBATE www.speechanddebate.org

AS LATINOS LIVING IN THIS COUNTRY, THERE IS A LIFELONG FEELING OF ‘I DON’ T BELONG HERE.’ SPEECH AND DEBATE GAVE ME THE COURAGE TO GET UP ON STAGE AND SAY, ‘ACTUALLY, WE DO.’

To further support our ongoing commitment to diversity and inclusion, the NSDA also created a series of classroom and tournament resources to celebrate Hispanic Heritage Month and Pride Month, to add to our successful Black History Month celebration.

WE ARE SPEECH &amp; DEBATE

I think speech and debate teaches us a lesson that we aren’t taught other places at such a young age—that despite having so much to learn in life, what we’ve learned so far is valuable and meaningful to the world. We’re not just kids who talk on the weekends. Speech and debate gives us a place where we’re encouraged to use our voices to do more, to find our heartbeat in the world and chase after it.

The William Woods Tate, Jr., National Student of the Year award annually recognizes one individual out of more than 140,000 student members who best embodies the organization’s Code of Honor: integrity, humility, respect, leadership, and service. Nominees must also demonstrate strong academic credentials and a commitment to the speech and debate community. The 2019 NSDA National Student of the Year award was presented by Richard Bitner in honor of Sharon Porter.

The National Speech &amp; Debate Tournament marks the capstone of

speech and debate activities for more than 140,000 members across the country. To attend, students must qualify at one of the Association’s 111 district tournaments or through one of our eight international

qualifying programs. The student competitors represent the best and

brightest young people across the United States and the globe.

The National Debate &amp; Speech Tournament has been held across the

country since 1931, and today is the largest academic competition in the

world. Each year, more than 4,500 high school students compete in a

week-long competition to determine the most prestigious title in high

You are the master of your own destiny. You set your own heights.

Dr. Thomas F. Freeman is the Head Coach Emeritus of the Texas Southern University Debate Team. He was the teacher of Martin Luther King Jr., advisor to actor Denzel Washington, and coach of Congresswoman Barbara Jordan.

David C. Frederick In Memory of B.J. and Lanny Naegelin

In Memory of Richard B. Sodikow

In Memory of Harry and LeVoyne Littlefield

In Memory of Bill Henderson

Winifred J. and Henry J. B. Dick In Honor of Helene Dick

In Memory of Phyllis Barton

Ken and Michelle Law In Memory of Carmendale Fernandes