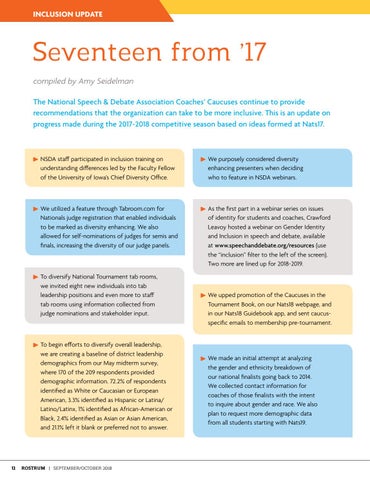 Seventeen from ’17 compiled by Amy Seidelman The National Speech &amp; Debate Association Coaches’ Caucuses continue to provide recommendations that the organization can take to be more inclusive. This is an update on progress made during the 2017-2018 competitive season based on ideas formed at Nats17.

NSDA staff participated in inclusion training on understanding differences led by the Faculty Fellow of the University of Iowa’s Chief Diversity Office.

We purposely considered diversity enhancing presenters when deciding who to feature in NSDA webinars.

We utilized a feature through Tabroom.com for Nationals judge registration that enabled individuals to be marked as diversity enhancing. We also allowed for self-nominations of judges for semis and finals, increasing the diversity of our judge panels.

As the first part in a webinar series on issues of identity for students and coaches, Crawford Leavoy hosted a webinar on Gender Identity and Inclusion in speech and debate, available at www.speechanddebate.org/resources (use the “inclusion” filter to the left of the screen). Two more are lined up for 2018-2019.

We upped promotion of the Caucuses in the Tournament Book, on our Nats18 webpage, and in our Nats18 Guidebook app, and sent caucusspecific emails to membership pre-tournament.

We made an initial attempt at analyzing the gender and ethnicity breakdown of our national finalists going back to 2014. We collected contact information for coaches of those finalists with the intent to inquire about gender and race. We also plan to request more demographic data from all students starting with Nats19.