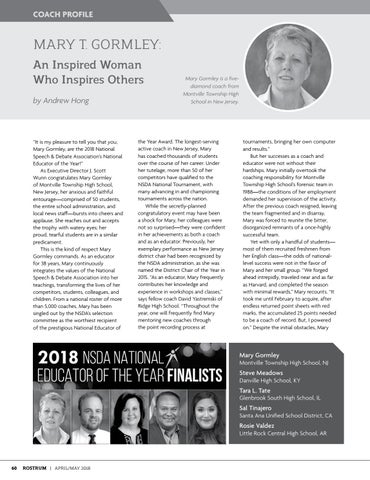 MARY T. GORMLEY: An Inspired Woman Who Inspires Others by Andrew Hong

“It is my pleasure to tell you that you, Mary Gormley, are the 2018 National Speech &amp; Debate Association’s National Educator of the Year!” As Executive Director J. Scott Wunn congratulates Mary Gormley of Montville Township High School, New Jersey, her anxious and faithful entourage—comprised of 50 students, the entire school administration, and local news staff—bursts into cheers and applause. She reaches out and accepts the trophy with watery eyes; her proud, tearful students are in a similar predicament. This is the kind of respect Mary Gormley commands. As an educator for 38 years, Mary continuously integrates the values of the National Speech &amp; Debate Association into her teachings, transforming the lives of her competitors, students, colleagues, and children. From a national roster of more than 5,000 coaches, Mary has been singled out by the NSDA’s selection committee as the worthiest recipient of the prestigious National Educator of

the Year Award. The longest-serving active coach in New Jersey, Mary has coached thousands of students over the course of her career. Under her tutelage, more than 50 of her competitors have qualified to the NSDA National Tournament, with many advancing in and championing tournaments across the nation. While the secretly-planned congratulatory event may have been a shock for Mary, her colleagues were not so surprised—they were confident in her achievements as both a coach and as an educator. Previously, her exemplary performance as New Jersey district chair had been recognized by the NSDA administration, as she was named the District Chair of the Year in 2015. “As an educator, Mary frequently contributes her knowledge and experience in workshops and classes,” says fellow coach David Yastremski of Ridge High School. “Throughout the year, one will frequently find Mary mentoring new coaches through the point recording process at

tournaments, bringing her own computer and results.” But her successes as a coach and educator were not without their hardships. Mary initially overtook the coaching responsibility for Montville Township High School’s forensic team in 1988—the conditions of her employment demanded her supervision of the activity. After the previous coach resigned, leaving the team fragmented and in disarray, Mary was forced to reunite the bitter, disorganized remnants of a once-highly successful team. Yet with only a handful of students— most of them recruited freshmen from her English class—the odds of nationallevel success were not in the favor of Mary and her small group. “We forged ahead intrepidly, traveled near and as far as Harvard, and completed the season with minimal rewards,” Mary recounts. “It took me until February to acquire, after endless returned point sheets with red marks, the accumulated 25 points needed to be a coach of record. But, I powered on.” Despite the initial obstacles, Mary