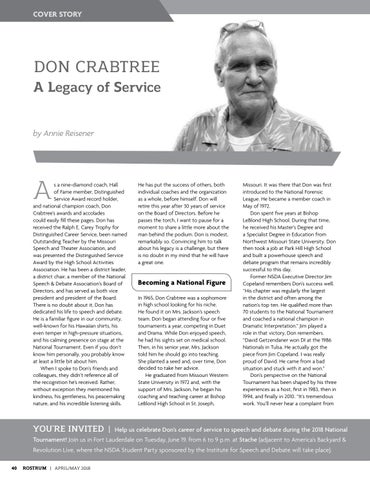 DON CRABTREE A Legacy of Service by Annie Reisener

s a nine-diamond coach, Hall of Fame member, Distinguished Service Award record holder, and national champion coach, Don Crabtree’s awards and accolades could easily fill these pages. Don has received the Ralph E. Carey Trophy for Distinguished Career Service, been named Outstanding Teacher by the Missouri Speech and Theater Association, and was presented the Distinguished Service Award by the High School Activities Association. He has been a district leader, a district chair, a member of the National Speech &amp; Debate Association’s Board of Directors, and has served as both vice president and president of the Board. There is no doubt about it, Don has dedicated his life to speech and debate. He is a familiar figure in our community, well-known for his Hawaiian shirts, his even temper in high-pressure situations, and his calming presence on stage at the National Tournament. Even if you don’t know him personally, you probably know at least a little bit about him. When I spoke to Don’s friends and colleagues, they didn’t reference all of the recognition he’s received. Rather, without exception they mentioned his kindness, his gentleness, his peacemaking nature, and his incredible listening skills.

He has put the success of others, both individual coaches and the organization as a whole, before himself. Don will retire this year after 30 years of service on the Board of Directors. Before he passes the torch, I want to pause for a moment to share a little more about the man behind the podium. Don is modest, remarkably so. Convincing him to talk about his legacy is a challenge, but there is no doubt in my mind that he will have a great one.

Becoming a National Figure In 1965, Don Crabtree was a sophomore in high school looking for his niche. He found it on Mrs. Jackson’s speech team. Don began attending four or five tournaments a year, competing in Duet and Drama. While Don enjoyed speech, he had his sights set on medical school. Then, in his senior year, Mrs. Jackson told him he should go into teaching. She planted a seed and, over time, Don decided to take her advice. He graduated from Missouri Western State University in 1972 and, with the support of Mrs. Jackson, he began his coaching and teaching career at Bishop LeBlond High School in St. Joseph,

Missouri. It was there that Don was first introduced to the National Forensic League. He became a member coach in May of 1972. Don spent five years at Bishop LeBlond High School. During that time, he received his Master’s Degree and a Specialist Degree in Education from Northwest Missouri State University. Don then took a job at Park Hill High School and built a powerhouse speech and debate program that remains incredibly successful to this day. Former NSDA Executive Director Jim Copeland remembers Don’s success well. “His chapter was regularly the largest in the district and often among the nation’s top ten. He qualified more than 70 students to the National Tournament and coached a national champion in Dramatic Interpretation.” Jim played a role in that victory, Don remembers. “David Getzendaner won DI at the 1986 Nationals in Tulsa. He actually got the piece from Jim Copeland. I was really proud of David. He came from a bad situation and stuck with it and won.” Don’s perspective on the National Tournament has been shaped by his three experiences as a host, first in 1983, then in 1994, and finally in 2010. “It’s tremendous work. You’ll never hear a complaint from

Tournament! Join us in Fort Lauderdale on Tuesday, June 19, from 6 to 9 p.m. at Stache (adjacent to America’s Backyard &amp; Revolution Live, where the NSDA Student Party sponsored by the Institute for Speech and Debate will take place). 40