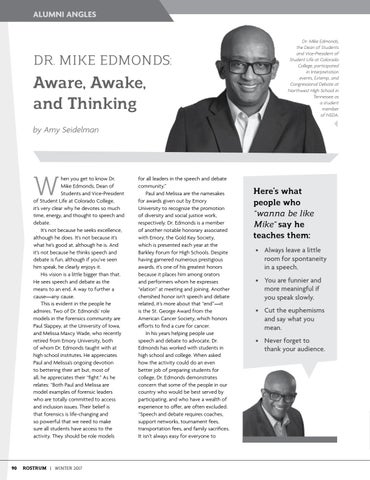 Dr. Mike Edmonds, the Dean of Students and Vice-President of Student Life at Colorado College, participated in Interpretation events, Extemp, and Congressional Debate at Northwest HIgh School in Tennessee as a student member of NSDA.

hen you get to know Dr. Mike Edmonds, Dean of Students and Vice-President of Student Life at Colorado College, it’s very clear why he devotes so much time, energy, and thought to speech and debate. It’s not because he seeks excellence, although he does. It’s not because it’s what he’s good at, although he is. And it’s not because he thinks speech and debate is fun, although if you’ve seen him speak, he clearly enjoys it. His vision is a little bigger than that. He sees speech and debate as the means to an end. A way to further a cause—any cause. This is evident in the people he admires. Two of Dr. Edmonds’ role models in the forensics community are Paul Slappey, at the University of Iowa, and Melissa Maxcy Wade, who recently retired from Emory University, both of whom Dr. Edmonds taught with at high school institutes. He appreciates Paul and Melissa’s ongoing devotion to bettering their art but, most of all, he appreciates their “fight.” As he relates: “Both Paul and Melissa are model examples of forensic leaders who are totally committed to access and inclusion issues. Their belief is that forensics is life-changing and so powerful that we need to make sure all students have access to the activity. They should be role models

for all leaders in the speech and debate community.” Paul and Melissa are the namesakes for awards given out by Emory University to recognize the promotion of diversity and social justice work, respectively. Dr. Edmonds is a member of another notable honorary associated with Emory, the Gold Key Society, which is presented each year at the Barkley Forum for High Schools. Despite having garnered numerous prestigious awards, it’s one of his greatest honors because it places him among orators and performers whom he expresses “elation” at meeting and joining. Another cherished honor isn’t speech and debate related, it’s more about that “end”—it is the St. George Award from the American Cancer Society, which honors efforts to find a cure for cancer. In his years helping people use speech and debate to advocate, Dr. Edmonds has worked with students in high school and college. When asked how the activity could do an even better job of preparing students for college, Dr. Edmonds demonstrates concern that some of the people in our country who would be best served by participating, and who have a wealth of experience to offer, are often excluded. “Speech and debate requires coaches, support networks, tournament fees, transportation fees, and family sacrifices. It isn’t always easy for everyone to

Here’s what people who “ wanna be like Mike” say he teaches them: • Always leave a little room for spontaneity in a speech. • You are funnier and more meaningful if you speak slowly. • Cut the euphemisms and say what you mean. • Never forget to thank your audience.