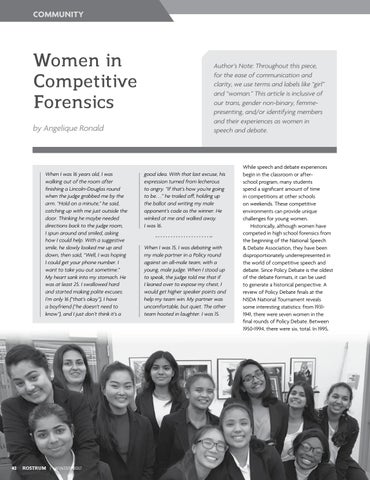 When I was 16 years old, I was walking out of the room after finishing a Lincoln-Douglas round when the judge grabbed me by the arm. “Hold on a minute,” he said, catching up with me just outside the door. Thinking he maybe needed directions back to the judge room, I spun around and smiled, asking how I could help. With a suggestive smile, he slowly looked me up and down, then said, “Well, I was hoping I could get your phone number. I want to take you out sometime.” My heart sank into my stomach. He was at least 25. I swallowed hard and started making polite excuses: I’m only 16 (“that’s okay”), I have a boyfriend (“he doesn’t need to know”), and I just don’t think it’s a

Author’s Note: Throughout this piece, for the ease of communication and clarity, we use terms and labels like “girl” and “woman.” This article is inclusive of our trans, gender non-binary, femmepresenting, and/or identifying members and their experiences as women in speech and debate.

good idea. With that last excuse, his expression turned from lecherous to angry. “If that’s how you’re going to be. . .” he trailed off, holding up the ballot and writing my male opponent’s code as the winner. He winked at me and walked away. I was 16.

When I was 15, I was debating with my male partner in a Policy round against an all-male team, with a young, male judge. When I stood up to speak, the judge told me that if I leaned over to expose my chest, I would get higher speaker points and help my team win. My partner was uncomfortable, but quiet. The other team hooted in laughter. I was 15.

While speech and debate experiences begin in the classroom or afterschool program, many students spend a significant amount of time in competitions at other schools on weekends. These competitive environments can provide unique challenges for young women. Historically, although women have competed in high school forensics from the beginning of the National Speech &amp; Debate Association, they have been disproportionately underrepresented in the world of competitive speech and debate. Since Policy Debate is the oldest of the debate formats, it can be used to generate a historical perspective. A review of Policy Debate finals at the NSDA National Tournament reveals some interesting statistics: from 19311941, there were seven women in the final rounds of Policy Debate. Between 1950-1994, there were six, total. In 1995,