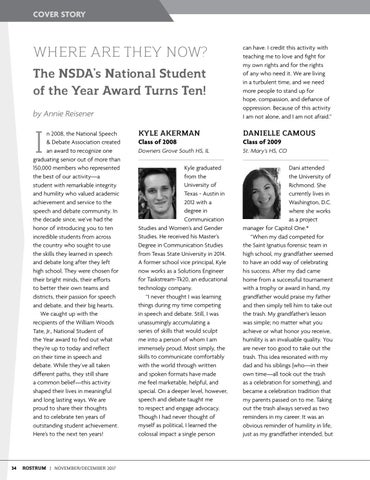 WHERE ARE THEY NOW? The NSDA’s National Student of the Year Award Turns Ten! by Annie Reisener

n 2008, the National Speech &amp; Debate Association created an award to recognize one graduating senior out of more than 150,000 members who represented the best of our activity—a student with remarkable integrity and humility who valued academic achievement and service to the speech and debate community. In the decade since, we’ve had the honor of introducing you to ten incredible students from across the country who sought to use the skills they learned in speech and debate long after they left high school. They were chosen for their bright minds, their efforts to better their own teams and districts, their passion for speech and debate, and their big hearts. We caught up with the recipients of the William Woods Tate, Jr., National Student of the Year award to find out what they’re up to today and reflect on their time in speech and debate. While they’ve all taken different paths, they still share a common belief—this activity shaped their lives in meaningful and long lasting ways. We are proud to share their thoughts and to celebrate ten years of outstanding student achievement. Here’s to the next ten years!

can have. I credit this activity with teaching me to love and fight for my own rights and for the rights of any who need it. We are living in a turbulent time, and we need more people to stand up for hope, compassion, and defiance of oppression. Because of this activity I am not alone, and I am not afraid.”

Kyle graduated from the University of Texas - Austin in 2012 with a degree in Communication Studies and Women’s and Gender Studies. He received his Master’s Degree in Communication Studies from Texas State University in 2014. A former school vice principal, Kyle now works as a Solutions Engineer for Taskstream-Tk20, an educational technology company. “I never thought I was learning things during my time competing in speech and debate. Still, I was unassumingly accumulating a series of skills that would sculpt me into a person of whom I am immensely proud. Most simply, the skills to communicate comfortably with the world through written and spoken formats have made me feel marketable, helpful, and special. On a deeper level, however, speech and debate taught me to respect and engage advocacy. Though I had never thought of myself as political, I learned the colossal impact a single person

Dani attended the University of Richmond. She currently lives in Washington, D.C. where she works as a project manager for Capitol One.* “When my dad competed for the Saint Ignatius forensic team in high school, my grandfather seemed to have an odd way of celebrating his success. After my dad came home from a successful tournament with a trophy or award in hand, my grandfather would praise my father and then simply tell him to take out the trash. My grandfather’s lesson was simple; no matter what you achieve or what honor you receive, humility is an invaluable quality. You are never too good to take out the trash. This idea resonated with my dad and his siblings (who—in their own time—all took out the trash as a celebration for something), and became a celebration tradition that my parents passed on to me. Taking out the trash always served as two reminders in my career. It was an obvious reminder of humility in life, just as my grandfather intended, but