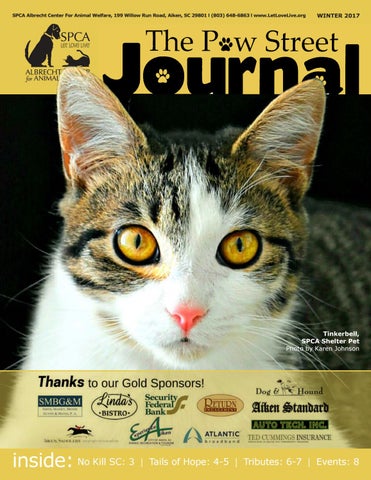 Thanks to our Gold Sponsors!

As we enter 2017 it seems appropriate to review the past year beginning with the acknowledgment of our two late Board Members, John Paveglio and Bob White. Both of whom gave countless hours of commitment to the shelter over multiple years. These gentlemen and their service will be sorely missed. We also have two outgoing Board Members, Judi Storey and Sam McGill who certainly deserve our gratitude for their contributions. At the same time we are welcoming three new Board Members; Lorian Peralta-Ramos, Paul Smith and Jill Thomas. Some highlights from 2016 include adopting out 900 pets to new homes, giving support to the Charleston Animal Society as they struggled to help their community cope with the onslaught of Hurricane Matthew, and defeating onerous State legislation that would have truly hampered our ability to provide the public with veterinary care. We built out our full service Veterinary Care Center, which helps owners who are over burdened with health care costs for their beloved pets. In order to help, we&#39;ve created the &quot;Tails of Hope&quot; fund to supplement the cost of these services. We are also encouraging more economically fortunate pet owners to consider the SPCA Albrecht Center for their everyday veterinary needs to assist in offsetting our additional expenses that we provide at a reduced rate for those in need. I can promise you that the doctors, along with their sharp clinical staff will provide excellent quality care for your special four-legged friends. All that we do is made possible by the generosity of so many. However, once again, Mr. and Mrs. Gary Albrecht and their family have gone above and beyond in establishing a trust that will continue to provide support year after year. There is a very long list of others the &quot;Critters” would like to give a “woof and meow” out to….our tireless hard working volunteers, the super star staff members, our energetic, diligent leader Barbara Nelson, and the dedicated Board of Directors. It is because all these pieces fit and work together that the SPCA Albrecht Center succeeds. THANK YOU ALL SO VERY MUCH!

Al Sorensen, Chairman of the Board

&quot;Tom and I are happy to make the SPCA Albrecht Center for Animal Welfare as a beneficiary in our Estate Plan. Animals have been a big part of our lives. They have always been there during times of stress and sadness. They don’t judge, they just want to give comfort and joy to us. They deserve a chance, too. We are very familiar with the quality of the Albrecht Center and are very appreciative of the wonderful work they do.&quot;

&quot;The Legacy Society is just a smart idea for future planning. My pets deserve a safe place if I leave them behind, and what better care than the SPCA?&quot;

Partnering for Change The SPCA Albrecht Center is proud to partner with Charleston Animal Society as a Key Resource Center, along with five other animal shelters across the state, in their bold No Kill South Carolina initiative.

The Boldest Animal Care Initiative in the U.S.A. At its core, the No Kill SC philosophy is about saving every healthy and treatable animal by using proven, researchbased strategies to build safer and stronger communities in South Carolina for all pets. Together, we will work to inspire, coach and train smaller shelters in life-saving strategies, including Charleston Animal Society&#39;s own 10-point No Kill Strategy which led to Charleston County becoming the first No-Kill Community in the Southeast. No Kill South Carolina is made possible by:

Room to Breathe The former SPCA Albrecht Center Clinic was designed to be a state-of-the-art, high volume, high quality, low-cost spay/neuter and vaccination clinic with a small lobby, exam prep room and surgery suite. That model served our shelter and community well for over three years - over 10,000 spay/neuter surgeries and countless vaccinations were performed. With our growth into a much-needed full-service Veterinary Care Center, it became clear that more room was needed to accommodate clients and their pets. So, in 2016, three separate exam rooms were added to the existing clinic structure to provide our clients with more privacy and to allow for better communication with the pet owner, and to add needed space for thorough exams and procedures. The SPCA Vet Center is open Tuesday - Saturday. Learn more at LetLoveLive.org/vet-care. www.LetLoveLive.org

Our Veterinary Care Center from all walks of life, includ treatment their pet needs

This is where our Tails o the chance to help neigh or emergency care, but a treatment.

Bailey was brought to us An exam revealed more p extreme tissue infection. M left no funds for the full cos of Hope fund, we were able care. After two surgeries and and back to being Mrs. A&#39;s co only true joy.

Teddy Bear was hit by a car resulting in a badly fractured leg and nerve damage. His owner sought care at her regular vet, where amputation was recommended. She wanted to save Teddy Bear&#39;s leg, but did not have the funds available at the time. After seeking a second opinion from our veterinary team, a discounted treatment plan to save the leg was put in place, thanks to Tails of Hope funds, and a payment plan was arranged for the remaining balance.

r provides full-service medical and dental care to loving pet owners ding those who, due to financial limitations, are unable to provide the s.

of Hope Veterinary Care Fund steps in - providing neighbors hbors who are faced with a beloved pet&#39;s medical are not able to afford the full cost of

by Mrs. A. to have an abscess checked. pressing, extensive dental abscesses and Mrs. A.&#39;s modest social security income st of treatment, but thanks to the Tails to provide $1,300 towards Bailey&#39;s d medication, Bailey was a new dog onstant companion and best friend - her

Give a &quot;Paw Up&quot; to pet owners in need. Visit www.LetLoveLive.org/TailsOfHope

Honoring Our Volunteers Our volunteers are supportive, generous, talented, enthusiastic and amazing. We will celebrate them on April 2nd with our annual Volunteer Luncheon. Know a volunteer you&#39;d like to nominate for an award? Email volunteer@LetLoveLive.org. Want to join this fantastic team? Visit LetLoveLive.org/volunteer to sign up! 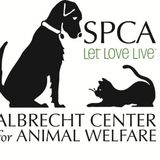