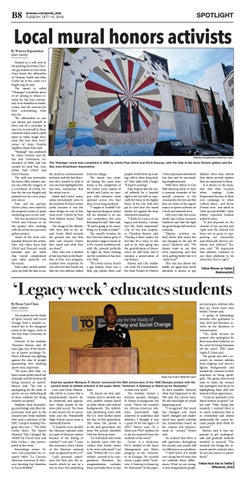 Painted on a wall next to the parking lot of thea Chevron gas station on East Santa Clara Street, the silhouettes of Tommie Smith and John Carlos lay in the center of a bright ring of color. The mural is called “‘Homage,” a symbolic piece of art aiming to always remind the San Jose community to be thankful to Smith, Carlos and all activists for their actionsdoing what they do. “It’s silhouetted so you can almost put yourself in there and it’s a reminder to stay true to yourself in those moments when you’re called upon to make tough decisions like how they were,” owner of Anno Domini Ggallery, Brian Eder said. “Homage” was produced by Anno Domini and the San Jose Downtown Association in 2004, and was created by local Bay Area artists Paul Ulrich and Chris Duncan. The wall was previously the home offor another mural, one with the imagery of a crucifixion of Christ, before the site was bought and painted over by a new property owner. Eder and his partner, Cherri Lakey, were asked by the property owner to paint something new on the wall. The two decided to bring Ulrich and Duncan in on the project after working with the artists on a previous gallery project. Aware of the close relationship between the artists, Eder and Lakey knew that Ulrich and Duncan’s would translate into art styles that would complement each other perfectly oin the mural. Eder, Lakey and the artists came up with the idea to use

The ‘Homage’ mural was completed in 2005 by artists Paul Ulrich and Chris Duncan, with the help of the Anno Domini gallery and the San Jose Downtown Association.

the mural to commemorate activism, and the first direction they wanted to look at was one that highlighted the San Jose community. that the mural was in. Smith and Carlos’ iconic salute immediately came to the forefront of Eder’s mind, partly because it was the main design on one of this most worn T-shirts by New York fashion brand, Triple Five Soul. The image of the athletes with their fists in the air and, heads tilted towards the ground was one that Eder said showed “where they stand and what they are about.” Eder, who was a student at San Jose State in the Bachelor of Fine Arts program, recalled how surprised he was when he first found out that the two athletes hailed

from his college. The mural was created during the same time frame as the completion of the Tower Lawn statues of Smith and Carlos on campus, with extensive work spanned across the four days of one long weekend. “I taught in Foothill College and one thing we always tell our students is no one ever remembers the ones that played it safe,” Eder said. “If you’re going to do something, try to make it matter.” The mural’s location by the Chevron station gives it the perfect stage to stand on to be viewed unobstructed, with the artwork perfectly in sight for those looking out the windows of San Jose City Hall. “It’s a busy corner, there’s a gas station, there was a little pay phone there and

people would show up making calls to their drug dealer,” Eder adds with a laugh. “It kept it exciting.” Eder hopesd that the mural willould be a hopeful sight to let eyes fall on, especially for those on the higher floors of the City Hall who get to view how the mural stands out against the busy downtown backdrop. “I think it’s a piece of our legacy and history, I always feel like that’s important,” City of San Jose employee Christina Ramos said. “Having it there makes me feel like it’s a story to tell, and as we start going into the gentrification of downtown, it’s still there and it remains a preservation of our history. Ramos and Lilia Sandoval, work for Councilmember Raul Peralez of District

3 who represents downtown San Jose and its surrounding neighborhoods. With their offices in City Hall allowing them to have a constant reminder of the mural’s presence in the community, the two say that they are aware of the significance of sports activism on a local and national level. Fifty years after the iconic Smith and Carlos moment, Sandoval says that the fight for great things still needs to continue. “[Sports activism today] shows that much has not changed in the last 50 years,” Sandoval said. “We always want to say that we’re improving and that we’re getting better but is it really true?” This year has shown the public yet again how much attention is drawn to pro

athletes when they inform fans about societal matters that are important to them. It is shown in the backlash that Nike received when making Colin Kaepernick the face of their new campaign or when LeBron James and Kevin Durant were was asked to “shut up and dribble” when hethey expressed histheir political views. “It just depends on the climate of our society and right now the climate has been not so great in supporting our minorities and ethnically diverse residents and athletes,” Ramos said. “It’s important that athletes continue to use their platform to do what they feel is right.” Follow Winona on Twitter @winonarjmh

The Institute for the Study of Sport, Society and Social Change held a student research fair as the inaugural event of the legacy week at San Jose State University on Monday. Director of the institute Theodore Butryn said, 50 years ago, one of the founders of sports sociology Dr. Harry Edwards was fighting against the idea of people questioning why studying sports were important. “50 years after that, we have a room pretty much full of people and the keynote all doing research on sports,” Butryn said. “No one is apologizing for the study of sports, we are celebrating all of these students for doing research on sports.” Students from kinesiology, psychology and other departments took part in the research fair. Some students who read a selection of the SJSU Campus Reading Program this year – “The John Carlos Story: The Sports Moment That Changed the World” by David Zirin and John Carlos – also participated in the event. Kinesiology senior Alvaro Leal presented his research titled “La Cascara: Mexican-American &amp; Mexican Sporting Fan Identities in Soccer/Futbol.”

Keynote speaker Marques R. Dexter connected the 50th anniversary of the 1968 Olympic protest with the current wave of athlete activism in his paper titled, “Activism: A Gateway to Stand up for Humanity.”

Leal came from Watsonville which is a town that is predominantly known for its farmwork and agriculture. Many people in the town play soccer. The town is also known for its soccer team and the Watsonville High School soccer team is nationally known. “A majority of us identify the Mexican national team as a part of Mexican culture because of the feeling of comfort,” Leal said. “I have this resonance when I think of the Mexican national team as opposed to the U.S.” Leal’s personal experience led him into his research which he saw as a way to learn the underlying

topic. He found out that individuals tend to identify one over another mainly based on their ethnic and cultural backgrounds. The individuals identifying more with the U.S. were further down the line of first generation. The closer the person is to the first generation, the more the person identifies with the Mexican team. “An individual also tends to identify more with the culture that he/she seems to be more welcomed,” Leal said, “Within the U.S., individuals seemed to be marginalized. Therefore, the marginalization excludes them and leads them to stay

in their own niche.” The institute invited a keynote speaker, Marques R. Dexter, to inaugurate the event. “Given his research on African-American athletes, particularly high achievers in academics and athletics, I thought it was a great fit for the legacy of SJSU,” Butryn said, “As a third-year Ph.D student, he is not far removed from the students in the room.” Dexter is a third-year Ph.D. student in the Sport Management and Policy program at the University of Georgia. He recently wrote a paper titled “Activism: A Gateway to Stand up for Humanity.” In the paper,

are starting to celebrate who they are much more than before,” Dexter said. A group of kinesiology students who graduated in May 2018 did literature reviews on the dynamics in women’s sport. “The study focuses on women who apologized for their masculine behavior on the court by being feminine off the court,” SJSU alum Aqdas F. Lilani said. The group also did a research on women athletes from religious and non-religious backgrounds and studied the variance in their responses in being apologetic. The group discovered ways to make the women less apologetic and focus on highlighting their skill sets instead of their appearance. “I had an optimistic view about women in sports,” Lilani said. “After doing this research, I realized there is so much unfairness that is so overlooked and dusted underneath the carpet because people don’t think it’s relevant.” Butryn said it was important to get undergraduate and graduate students involved in research. “The research fair brings the research and its contents alive, it’s not just names in parenthesis.”

he drew parallels between what had happened in the ‘60s and the current wave. He also shed light on what’s happening now. “I recognized that much has changed and much hasn’t changed and understood how sports activism has transformed based on the context and advancement in society,” Dexter said. He realized that there is still ignorance throughout the society and people still see differences as a problem. “I don’t know if it would ever chang but it’s time that we celebrate those differences. What we are seeing Follow Huan Xun on Twitter @Huanxun_chan is that marginalized people 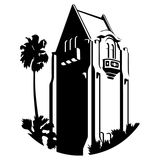