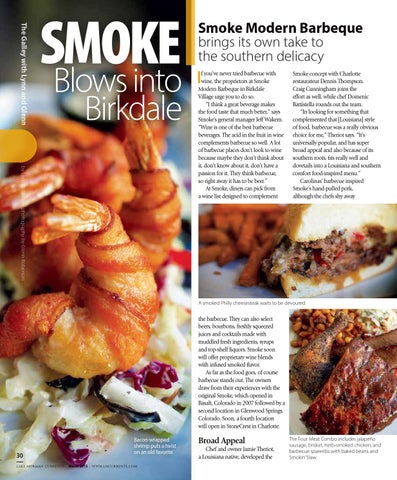 The Galley with Lynn and Glenn

Smoke Modern Barbeque brings its own take to the southern delicacy

f you’ve never tried barbecue with wine, the proprietors at Smoke Modern Barbeque in Birkdale Village urge you to do so. “I think a great beverage makes the food taste that much better,” says Smoke’s general manager Jeff Wakem. “Wine is one of the best barbecue beverages. The acid in the fruit in wine complements barbecue so well. A lot of barbecue places don’t look to wine because maybe they don’t think about it, don’t know about it, don’t have a passion for it. They think barbecue, so right away it has to be beer.” At Smoke, diners can pick from a wine list designed to complement

Smoke concept with Charlotte restaurateur Dennis Thompson. Craig Cunningham joins the effort as well, while chef Domenic Battistella rounds out the team. “In looking for something that complemented that [Louisiana] style of food, barbecue was a really obvious choice for me,” Theriot says. “It’s universally popular, and has super broad appeal and also because of its southern roots, fits really well and dovetails into a Louisiana and southern comfort food-inspired menu.” Carolinas’ barbecue inspired Smoke’s hand-pulled pork, although the chefs shy away

A smoked Philly cheesesteak waits to be devoured.

the barbecue. They can also select beers, bourbons, freshly squeezed juices and cocktails made with muddled fresh ingredients, syrups and top-shelf liquors. Smoke soon will offer proprietary wine blends with infused smoked flavor. As far as the food goes, of course barbecue stands out. The owners draw from their experiences with the original Smoke, which opened in Basalt, Colorado in 2007 followed by a second location in Glenwood Springs, Colorado. Soon, a fourth location will open in StoneCrest in Charlotte.

Bacon-wrapped shrimp puts a twist on an old favorite. 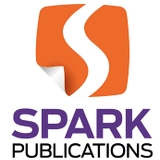