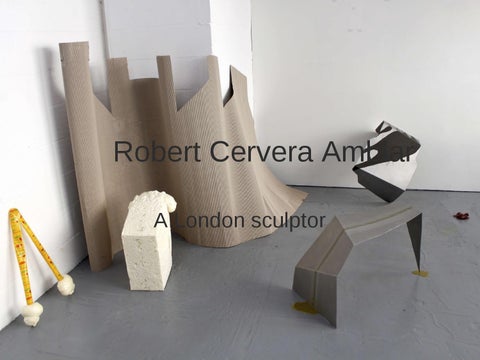 Recent history of British art, the role of sculpture in it and my work in that context.

These are my personal, subjective observations, based on: -my personal art network -my exposure to art magazines, talks and conferences -my attendance to exhibitions and art fairs.

London: everything from everywhere every culture religion nationality art style

A bit of recent history: Turner Prize - Since 1984. - Four artists based in the UK are shortlisted for a solo show theyâ&#x20AC;&#x2122;ve had. - Sometimes controversial - respected because of that. - Good survey of current trends in art. - Career-changing.

Karla Black, shortlisted in 2011. Installation view at a gallery in Berlin.

1980s: New British Sculpture - Reaction to Minimal and Conceptual art from the 70s. - Return to the use of a wide range of skills and techniques of fabrication. - Return to traditional materials and methods such as carving. - Figurative and metaphoric imagery reappear, together with poetic or evocative titles. - A strong group of sculptors appear in the UK: New British Sculpture.

- Accumulation, ordering, composing. - â&#x20AC;&#x2DC;To connect with the world, start with physical matter.â&#x20AC;&#x2122; - Make evident all the objects and images that surround us, break with the superficial, functional relationship with them. - References to geology and archeology, past and present, nature and culture.

- He uses unformed basic materials like sheet metal and laminated wood. - His sculptures explored, by the use of metaphor, ideas that defined human experience through language and the senses.

Richard Wentworth - Assistant to Henry Moore. - Head of RCA Sculpture. - Interest in the unexpected correlation of found objects and industrial materials. - He takes mundane objects and transforms their role and identity.

Alison Wilding - Interest in the sensual and textural properties of materials and their location in space and light. - Brings together separate materials and contrasting forms in a conjunction at once satisfying and slightly mysterious.

Barry Flanagan - Sculptor and printmaker. 1941-2009. - Emphasis on the intrinsic qualities of the materials. - Forms made of stitched, dyed hessian filled with plaster and sand. - Rope, wood branches, fabric, etc. to explore form and sculptural questions.

- His works are explicitly concerned with the fundamental dilemmas of human existence. - Themes: the fragility of life, society's reluctance to confront death, and the nature of love and desire.

Mother and Child Divided 1993 Cow and calf in formaldehyde tanks.

My bed 1998 By presenting her bed as art, Tracey Emin shares her most personal space, revealing sheâ&#x20AC;&#x2122;s as insecure and imperfect as the rest of the world.

Confessional art: she reveals intimate details from her life to engage the viewer with her expressions of universal emotions.

- She gives objects a â&#x20AC;&#x2DC;cartoonâ&#x20AC;&#x2122; treatment: steam-rolling them, exploding them. - Cold Dark Matter: restored three-dimensional volume of a garden shed exploded by the British Army. Surviving fragments, suspended from the ceiling and lit by a single bulb.

2000s until now - Renewed interest in materials, not only ideas. - More subtle work that grows slowly in the viewer. - No YBA-style shock tactics. - Looking again at language, form, process. - Interest in discoveries in the technique itself and how that creates new experiences in the viewer.

Roger Hiorns Seizure 2008 75,000 litres of copper sulphate solution pumped into a flat and left to rest. Crystalline growth on the walls, floor, ceiling and bath.

- Fascinated by the processes involved in transforming one object or substance into another. - He makes objects, installations, and pilgrimagelike journeys which draw out an array of ideas about nature, technology and economics. - He describes his work as â&#x20AC;&#x2DC;the physical manifestation of a thought processâ&#x20AC;&#x2122;. Shedboatshed 2005 Taking a wooden shed, turning it into a boat, sailing it down the Rhine and turning it back into a shed.

Lucy Skaer - Drawings, prints, sculptures and films combined in installations. - The experience of seeing an image or object that does not immediately reveal its form. - Leviathan Edge: huge skull of a whale, only visible through vertical thin strips.

Martin Creed - His work plays on definitions of art, using techniques reminiscent of those employed by Marcel Duchamp in his presentation of objects and ideas.

QuickTime™ and a decompressor are needed to see this picture.

- It is the placement of the objects, rather than their intrinsic qualities, that qualifies their meaning.

Work No.850 1988-9 A person running as fast as they can every thirty seconds through the gallery. The beauty of human movement in its purest form, a recurring yet infinitely variable line drawn between two points.

Known as ‘Half the Air in a Given Space’, consists of a gallery half-filled with balloons, creating a physical experience for the visitor of what that volume of air actually feels like.

The Coral Reef 2000 Labyrinth of rooms, doors and passageways. The rooms seems to have been used until recently by underground characters: political activists, taxi drivers, bank robbers and religious extremists.

Now: Post-Postmodern London Postmodernism: - Describes changes in Western society and culture from the 1960s. - Anti-authoritarian movements. - In art: - Reaction to Modernism. - No distinction high/popular culture. - No boundary between art and life. - No boundary between media. - Fragmentation of styles, no central definition of what art should be. - Some styles: Pop Art, Post-minimalism, Neo-expressionism, Feminist Art, YBAs, Conceptual Art.

Moving out of post-modernism: some signs 1. The cynical and relativistic feeling of post-modern culture feels tired. 2. From ‘there is nothing certain any more, nothing to believe in, everything is fragmented, every school or trend has been tried, exhausted and abandoned’ to ‘let’s believe in something, let’s have faith in art and what art can do.’ 3. Detachment, cynicism and conceptual, cold work is not “in” anymore. Return to work that involves actual making, studio-based practices, a hands-on approach, skills. 4. Modernism is not a forbidden area any more. But young artists are coming to it with a sense of humour and not following the Modernist dogmas. 5. There is less fear of making aesthetically pleasing work. Beauty, which Postmodernism seemed to hate, is coming back.

Performative elements. A machine swings a fluorescent tube from left to right endlessly. Machine without a purpose - other than aesthetic seduction.

Empty packaging. References to consumption but also a celebration of formal beauty in everyday things.

Another machine of mysterious purpose.

An intervention into the architecture of the space.

One of the best sculpture MAs in the world that doesnâ&#x20AC;&#x2122;t take itself too seriously..

My work in that context

Materiality - The qualities of materials: weight, gravity, stiffness, softness. - Highlighting the behaviour of material: how it moves, stands, hangs or falls. - Emotional connection with the viewer (our body is also material).

- Containers and spillages. - Human need to contain fluids and shapeless solids, but fascination with flow.

Materials that evolve. Sculpture as a time-based medium.

- Using all elements of life as a new alphabet for the arts. In this case, tin cans. - References to Modernist structures and forms but with a sense of humour. FMCG 2011

The structure of a poem expressed in a material language.

Human agency - Our capacity to make, to manipulate materials. - Example: how we tie string around things to make bundles. - A lot of this in Nepal.

The meeting of art and life.

Beauty and aesthetic value in things in the streets.

There is a great opportunity for Nepali sculpture - Great making skills, great arts tradition. - A Western art world that is looking with interest towards other canons and art histories (global modernities). - A certain freedom from the weight of recent Western art history. (A leap from Modernism to the future). - At the same time, with Internet, the chance to catch up directly with whatâ&#x20AC;&#x2122;s going on.

http://channel.tate.org.uk/podcasts http://whitney.org/WatchAndListen Show your work and see work from all the world: 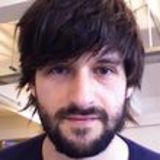 Overview of the recent decades in British Art and sculpture. My work in that context. By Robert Cervera Amblar

Overview of the recent decades in British Art and sculpture. My work in that context. By Robert Cervera Amblar