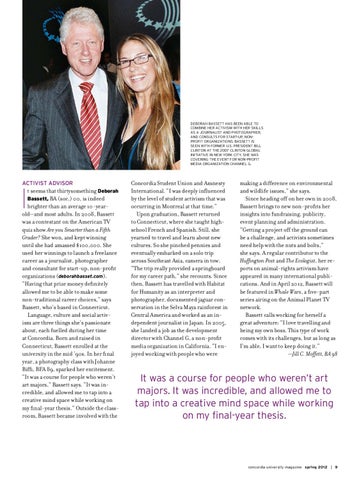 DEBORAH BASSETT HAS BEEN ABLE TO COMBINE HER ACTIVISM WITH HER SKILLS AS A JOURNALIST AND PHOTOGRAPHER, AND CONSULTS FOR START-UP, NONPROFIT ORGANIZATIONS. BASSETT IS SEEN WITH FORMER U.S. PRESIDENT BILL CLINTON AT THE 2007 CLINTON GLOBAL INITIATIVE IN NEW YORK CITY. SHE WAS COVERING THE EVENT FOR NON-PROFIT MEDIA ORGANIZATION CHANNEL G.

t seems that thirtysomething Deborah Bassett, BA (soc.) 00, is indeed brighter than an average 10-yearold—and most adults. In 2008, Bassett was a contestant on the American TV quiz show Are you Smarter than a Fifth Grader? She won, and kept winning until she had amassed $100,000. She used her winnings to launch a freelance career as a journalist, photographer and consultant for start-up, non-profit organizations (deborahbasset.com). “Having that prize money definitely allowed me to be able to make some non-traditional career choices,” says Bassett, who’s based in Connecticut. Language, culture and social activism are three things she’s passionate about, each fuelled during her time at Concordia. Born and raised in Connecticut, Bassett enrolled at the university in the mid ’90s. In her final year, a photography class with Johanne Biffi, BFA 89, sparked her excitement. “It was a course for people who weren’t art majors,” Bassett says. “It was incredible, and allowed me to tap into a creative mind space while working on my final-year thesis.” Outside the classroom, Bassett became involved with the

Concordia Student Union and Amnesty International. “I was deeply influenced by the level of student activism that was occurring in Montreal at that time.” Upon graduation, Bassett returned to Connecticut, where she taught highschool French and Spanish. Still, she yearned to travel and learn about new cultures. So she pinched pennies and eventually embarked on a solo trip across Southeast Asia, camera in tow. “The trip really provided a springboard for my career path,” she recounts. Since then, Bassett has travelled with Habitat for Humanity as an interpreter and photographer, documented jaguar conservation in the Selva Maya rainforest in Central America and worked as an independent journalist in Japan. In 2005, she landed a job as the development director with Channel G, a non-profit media organization in California. “I enjoyed working with people who were

making a difference on environmental and wildlife issues,” she says. Since heading off on her own in 2008, Bassett brings to new non-profits her insights into fundraising, publicity, event planning and administration. “Getting a project off the ground can be a challenge, and activists sometimes need help with the nuts and bolts,” she says. A regular contributor to the Huffington Post and The Ecologist, her reports on animal-rights activism have appeared in many international publications. And in April 2012, Bassett will be featured in Whale Wars, a five-part series airing on the Animal Planet TV network. Bassett calls working for herself a great adventure: “I love travelling and being my own boss. This type of work comes with its challenges, but as long as I’m able, I want to keep doing it.” —Jill C. Moffett, BA 98

It was a course for people who weren’t art majors. It was incredible, and allowed me to tap into a creative mind space while working on my final-year thesis.