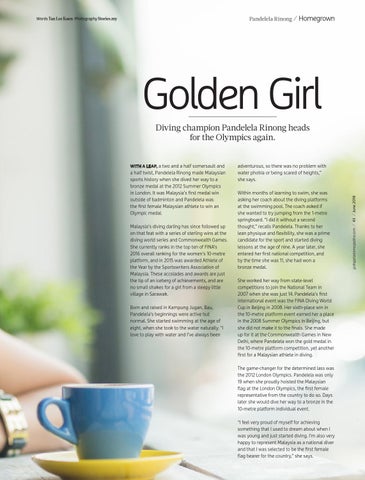 Malaysia’s diving darling has since followed up on that feat with a series of sterling wins at the diving world series and Commonwealth Games. She currently ranks in the top ten of FINA’s 2016 overall ranking for the women’s 10-metre platform, and in 2015 was awarded Athlete of the Year by the Sportswriters Association of Malaysia. These accolades and awards are just the tip of an iceberg of achievements, and are no small shakes for a girl from a sleepy little village in Sarawak. Born and raised in Kampung Jugan, Bau, Pandelela’s beginnings were active but normal. She started swimming at the age of eight, when she took to the water naturally. “I love to play with water and I’ve always been

adventurous, so there was no problem with water phobia or being scared of heights,” she says. Within months of learning to swim, she was asking her coach about the diving platforms at the swimming pool. The coach asked if she wanted to try jumping from the 1-metre springboard. “I did it without a second thought,” recalls Pandelela. Thanks to her lean physique and flexibility, she was a prime candidate for the sport and started diving lessons at the age of nine. A year later, she entered her first national competition, and by the time she was 11, she had won a bronze medal. She worked her way from state-level competitions to join the National Team in 2007 when she was just 14. Pandelela’s first international event was the FINA Diving World Cup in Beijing in 2008. Her sixth-place win in the 10-metre platform event earned her a place in the 2008 Summer Olympics in Beijing, but she did not make it to the finals. She made up for it at the Commonwealth Games in New Delhi, where Pandelela won the gold medal in the 10-metre platform competition, yet another first for a Malaysian athlete in diving. The game-changer for the determined lass was the 2012 London Olympics. Pandelela was only 19 when she proudly hoisted the Malaysian flag at the London Olympics, the first female representative from the country to do so. Days later she would dive her way to a bronze in the 10-metre platform individual event. “I feel very proud of myself for achieving something that I used to dream about when I was young and just started diving. I’m also very happy to represent Malaysia as a national diver and that I was selected to be the first female flag bearer for the country,” she says.

WITH A LEAP, a two and a half somersault and a half twist, Pandelela Rinong made Malaysian sports history when she dived her way to a bronze medal at the 2012 Summer Olympics in London. It was Malaysia’s first medal win outside of badminton and Pandelela was the first female Malaysian athlete to win an Olympic medal. 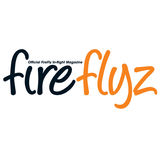