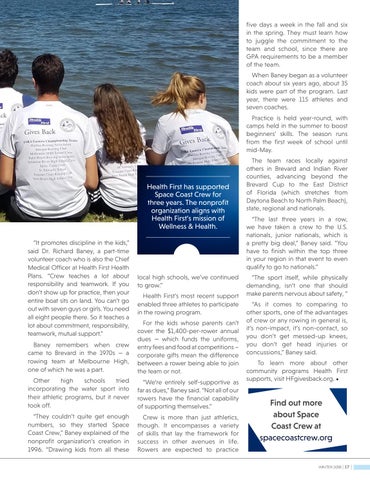 five days a week in the fall and six in the spring. They must learn how to juggle the commitment to the team and school, since there are GPA requirements to be a member of the team. When Baney began as a volunteer coach about six years ago, about 35 kids were part of the program. Last year, there were 115 athletes and seven coaches. Practice is held year-round, with camps held in the summer to boost beginners’ skills. The season runs from the first week of school until mid-May.

Health First has supported Space Coast Crew for three years. The nonprofit organization aligns with Health First’s mission of Wellness &amp; Health. “It promotes discipline in the kids,” said Dr. Richard Baney, a part-time volunteer coach who is also the Chief Medical Officer at Health First Health Plans. “Crew teaches a lot about responsibility and teamwork. If you don’t show up for practice, then your entire boat sits on land. You can’t go out with seven guys or girls. You need all eight people there. So it teaches a lot about commitment, responsibility, teamwork, mutual support.”

Baney remembers when crew came to Brevard in the 1970s — a rowing team at Melbourne High, one of which he was a part.

For the kids whose parents can’t cover the $1,400-per-rower annual dues — which funds the uniforms, entry fees and food at competitions – corporate gifts mean the difference between a rower being able to join the team or not.

Other high schools tried incorporating the water sport into their athletic programs, but it never took off.

“We’re entirely self-supportive as far as dues,” Baney said. “Not all of our rowers have the financial capability of supporting themselves.”

“They couldn’t quite get enough numbers, so they started Space Coast Crew,” Baney explained of the nonprofit organization’s creation in 1996. “Drawing kids from all these

Crew is more than just athletics, though. It encompasses a variety of skills that lay the framework for success in other avenues in life. Rowers are expected to practice

The team races locally against others in Brevard and Indian River counties, advancing beyond the Brevard Cup to the East District of Florida (which stretches from Daytona Beach to North Palm Beach), state, regional and nationals. “The last three years in a row, we have taken a crew to the U.S. nationals, junior nationals, which is a pretty big deal,” Baney said. “You have to finish within the top three in your region in that event to even qualify to go to nationals.” “The sport itself, while physically demanding, isn’t one that should make parents nervous about safety, “ “As it comes to comparing to other sports, one of the advantages of crew or any rowing in general is, it’s non-impact, it’s non-contact, so you don’t get messed-up knees, you don’t get head injuries or concussions,” Baney said. To learn more about other community programs Health First supports, visit HFgivesback.org. ◆

Find out more about Space Coast Crew at spacecoastcrew.org 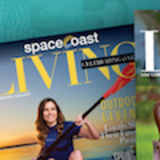