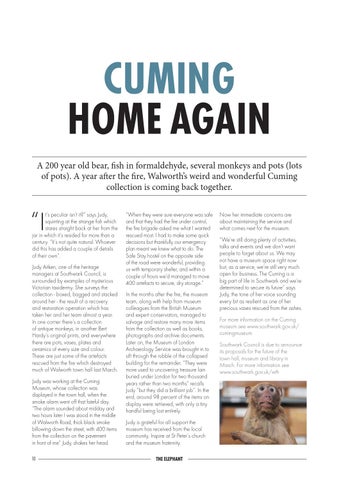 CUMING HOME AGAIN A 200 year old bear, fish in formaldehyde, several monkeys and pots (lots of pots). A year after the fire, Walworth’s weird and wonderful Cuming collection is coming back together.

t’s peculiar isn’t it?” says Judy, squinting at the strange fish which stares straight back at her from the jar in which it’s resided for more than a century. “It’s not quite natural. Whoever did this has added a couple of details of their own”. Judy Aitken, one of the heritage managers at Southwark Council, is surrounded by examples of mysterious Victorian taxidermy. She surveys the collection - boxed, bagged and stacked around her - the result of a recovery and restoration operation which has taken her and her team almost a year. In one corner there’s a collection of antique monkeys, in another Bert Hardy’s original prints, and everywhere there are pots, vases, plates and ceramics of every size and colour. These are just some of the artefacts rescued from the fire which destroyed much of Walworth town hall last March. Judy was working at the Cuming Museum, whose collection was displayed in the town hall, when the smoke alarm went off that fateful day. “The alarm sounded about midday and two hours later I was stood in the middle of Walworth Road, thick black smoke billowing down the street, with 400 items from the collection on the pavement in front of me” Judy, shakes her head.

“When they were sure everyone was safe and that they had the fire under control, the fire brigade asked me what I wanted rescued most. I had to make some quick decisions but thankfully our emergency plan meant we knew what to do. The Safe Stay hostel on the opposite side of the road were wonderful, providing us with temporary shelter, and within a couple of hours we’d managed to move 400 artefacts to secure, dry storage.” In the months after the fire, the museum team, along with help from museum colleagues from the British Museum and expert conservators, managed to salvage and restore many more items from the collection as well as books, photographs and archive documents. Later on, the Museum of London Archaeology Service was brought in to sift through the rubble of the collapsed building for the remainder. “They were more used to uncovering treasure lain buried under London for two thousand years rather than two months” recalls Judy “but they did a brilliant job”. In the end, around 98 percent of the items on display were retrieved, with only a tiny handful being lost entirely.

Now her immediate concerns are about maintaining the service and what comes next for the museum. “We’re still doing plenty of activities, talks and events and we don’t want people to forget about us. We may not have a museum space right now but, as a service, we’re still very much open for business. The Cuming is a big part of life in Southwark and we’re determined to secure its future” says Judy, the tone of her voice sounding every bit as resilient as one of her precious vases rescued from the ashes. For more information on the Cuming museum see www.southwark.gov.uk/ cumingmuseum Southwark Council is due to announce its proposals for the future of the town hall, museum and library in March. For more information see www.southwark.gov.uk/wth

Judy is grateful for all support the museum has received from the local community, Inspire at St Peter’s church and the museum fraternity. THE ELEPHANT 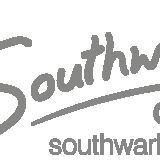