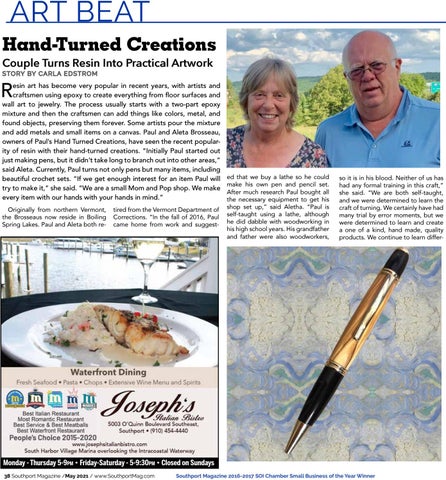 esin art has become very popular in recent years, with artists and craftsmen using epoxy to create everything from floor surfaces and wall art to jewelry. The process usually starts with a two-part epoxy mixture and then the craftsmen can add things like colors, metal, and found objects, preserving them forever. Some artists pour the mixture and add metals and small items on a canvas. Paul and Aleta Brosseau, owners of Paul’s Hand Turned Creations, have seen the recent popularity of resin with their hand-turned creations. “Initially Paul started out just making pens, but it didn’t take long to branch out into other areas,” said Aleta. Currently, Paul turns not only pens but many items, including beautiful crochet sets. “If we get enough interest for an item Paul will try to make it,” she said. “We are a small Mom and Pop shop. We make every item with our hands with your hands in mind.” Originally from northern Vermont, the Brosseaus now reside in Boiling Spring Lakes. Paul and Aleta both re-

tired from the Vermont Department of Corrections. “In the fall of 2016, Paul came home from work and suggest-

ed that we buy a lathe so he could make his own pen and pencil set. After much research Paul bought all the necessary equipment to get his shop set up,” said Aletha. “Paul is self-taught using a lathe, although he did dabble with woodworking in his high school years. His grandfather and father were also woodworkers, 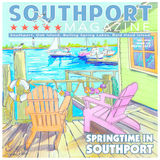