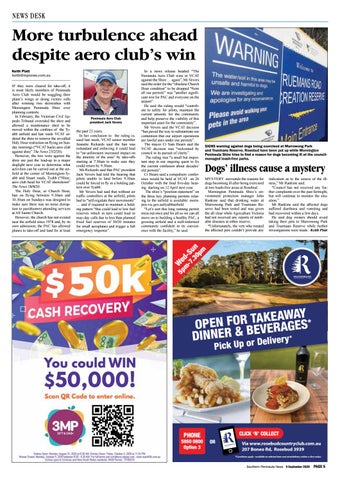 More turbulence ahead despite aero club’s win IF they were cleared for take-off, it is most likely members of Peninsula Aero Club would be waggling their plane’s wings or doing victory rolls after winning two skirmishes with Mornington Peninsula Shire over planning controls. In February, the Victorian Civil Appeals Tribunal overruled the shire and allowed a maintenance shed to be moved within the confines of the Tyabb airfield and last week VCAT ordered the shire to remove the so-called Holy Hour restriction on flying on Sunday mornings (“VCAT backs aero club against shire” The News 25/2/20). However, the two wins against the shire are just the lead-up to a major dogfight next year to determine what activities can be carried out at the airfield at the corner of Mornington-Tyabb and Stuart roads, Tyabb (“Shire, aero club head for VCAT showdown” The News 18/8/20. The Holy Hour, or Church Hour, ban on flying between 9.30am and 10.30am on Sundays was designed to make sure there was no noise disruption to parishioners attending services at All Saints Church. However, the church has not existed near the airfield since 1978 and, by its own admission, the PAC has allowed planes to take-off and land for at least

the past 25 years. In her conclusion to the ruling issued last week, VCAT senior member Jeanette Rickards said the ban was redundant and enforcing it could lead to “an unforeseen increased impact on the amenity of the area” by take-offs starting at 7.30am to make sure they could return by 9.30am. Ms Rickards said that PAC president Jack Vevers had told the hearing that pilots unable to land before 9.30am could be forced to fly in a holding pattern over Tyabb. Mr Vevers had said that without air traffic controllers at the airfield, pilots had to “self-regulate their movements” … and if required to maintain a holding pattern “this could lead to low fuel reserves which in turn could lead to may-day calls due to less than planned fixed fuel reserves of 30/20 minutes for small aeroplanes and trigger a full emergency response”.

In a news release headed “The Peninsula Aero Club wins in VCAT against the Shire … again”, Mr Vevers said the order for the “obsolete Church Hour condition” to be dropped “from all our permits” was “another significant win for PAC and everyone on the airport”. He said the ruling would “contribute to safety for pilots, maintain the current amenity for the community and help preserve the viability of this important asset for the community”. Mr Vevers said the VCAT decision “has paved the way to substantiate our contention that our airport operations are lawful uses under our permits”. The mayor Cr Sam Hearn said the VCAT decision was “welcomed by council in its pursuit of clarity”. The ruling was “a small but important step in our ongoing quest to fix the current confusion about decades’ old permits”. Cr Hearn said a compulsory conference would be held at VCAT on 26 October with the final five-day hearing starting on 12 April next year. The shire’s “position statement” on the three key planning permits relating to the airfield is available: mornpen.vic.gov.au/tyabbairfield “Let’s sort this long running permit mess out once and for all so we can all move on to building a healthy PAC, a growing airfield and a well-informed community confident in its coexistence with the facility,” he said.

SIGNS warning against dogs being exercised at Murrowong Park and Truemans Reserve, Rosebud have been put up while Mornington Peninsula Shire tries to find a reason for dogs becoming ill at the councilmanaged leash-free parks.

Dogs’ illness cause a mystery MYSTERY surrounds the reasons for dogs becoming ill after being exercised at two leash-free areas at Rosebud. Mornington Peninsula Shire’s environment protection manager John Rankine said that drinking water at Murrowong Park and Truemans Reserve had been tested and was given the all clear while Agriculture Victoria had not received any reports of notifiable diseases at either reserve. “Unfortunately, the vets who treated the affected pets couldn’t provide any

indication as to the source of the illness,” Mr Rankine said. “Council has not received any further complaints over the past fortnight, but will continue to monitor the situation.” Mr Rankine said the affected dogs suffered diarrhoea and vomiting and had recovered within a few days. He said dog owners should avoid taking their pets to Murrowong Park and Truemans Reserve while further investigations were made. Keith Platt

Y A W A E K A T OPEN FORBEVERAGES* DINNER &amp; or Delivery* Pick Up