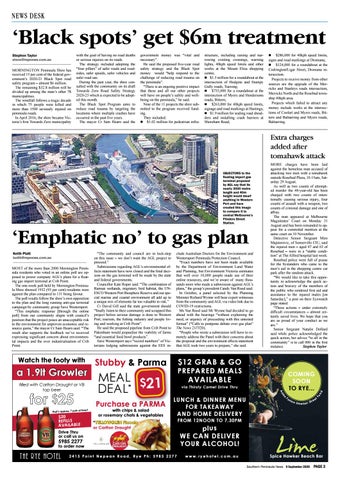 ‘Black spots’ get $6m treatment Stephen Taylor steve@mpnews.com.au MORNINGTON Peninsula Shire has received 15 per cent of the federal government’s 2020-21 Black Spot road safety program – almost $6 million. The remaining $32.8 million will be divided up among the state’s other 78 municipalities. The windfall follows a tragic decade in which 75 people were killed and more than 1500 seriously injured on peninsula roads. In April 2016, the shire became Victoria’s first Towards Zero municipality

with the goal of having no road deaths or serious injuries on its roads. The strategy included adopting the “four pillars” of safer roads and roadsides, safer speeds, safer vehicles and safer road use. During the past year, the shire consulted with the community on its draft Towards Zero Road Safety Strategy 2020-25 which is expected to be adopted this month. The Black Spot Program aims to reduce road trauma by targeting the locations where multiple crashes have occurred in the past five years. The mayor Cr Sam Hearn said the

government money was “vital and necessary”. He said the proposed five-year road safety strategy and the Black Spot money would “help respond to the challenge of reducing road trauma on the peninsula”. “There is an ongoing positive impact that these and all our other projects will have on people’s safety and wellbeing on the peninsula,” he said. Nine of the 11 projects the shire submitted to the program received funding. They included: n $1.02 million for pedestrian infra-

structure, including raising and narrowing existing crossings, warning lights, 40kph speed limits and other works at the Mount Eliza shopping centre; n $1.5 million for a roundabout at the intersection of Hodgins and Stumpy Gully roads, Tuerong; n $735,000 for a roundabout at the intersection of Myers and Hendersons roads, Bittern; n $263,000 for 40kph speed limits, signage and road markings at Hastings; n $1.9 million for sealing road shoulders and installing crash barriers at Shoreham Road;

n $286,000 for 40kph speed limits, signs and road markings at Dromana; n $124,000 for a roundabout at the Codrington/Ligar Street, Dromana intersection. Projects to receive money from other sources are the upgrade of the Merricks and Stanleys roads intersection, Merricks North and the Rosebud township 40kph area. Projects which failed to attract any money include works at the intersections of Coolart and Myers roads, Bittern and Balnarring and Myers roads, Balnarring.

Extra charges added after tomahawk attack OBJECTORS to the floating import gas terminal proposed by AGL say that its nearly 3000 metre length and 40m height would dwarf anything In Western Port and have created this image to compare it to central Melbourne’s Flinders Street Station.

‘Emphatic no’ to gas plan

Watch the footy with

$20 REFILLS AVAILABLE Drive Thru or call us on

Purchase a PARMA with chips & salad or rosemary chats & vegetables

clude Australian Doctors for the Environment and Westernport Peninsula Protection Council. “Exact numbers have not been made available by the Department of Environment Land Water and Planning, but Environment Victoria estimates that well over 10,000 people made use of their online resources, and we’re aware of many thousands more who made a submission against AGL’s plans,” the group’s president Candy Van Rood said. In October, a panel selected by the Planning Minister Richard Wynne will hear expert witnesses from the community and AGL via video link due to COVID-19 restrictions. Ms Van Rood said Mr Wynne had decided to go ahead with the hearings “without explaining the need, or urgency of proceeding with this untested format” (“Calls to postpone debate over gas plan” The News 21/7/20). “People who wrote a submission will have to remotely address the Panel with their concerns about the proposal and the environment effects statement that AGL took two years to prepare,” she said.

MOST of the more than 2000 Mornington Peninsula residents who voted in an online poll are opposed to power company AGL’s plans for a floating gas import terminal at Crib Point. The one-week poll held by Mornington Peninsula Shire showed 1932 (93 per cent) residents were against the plan compared to 131 being favour. The poll results follow the shire’s own opposition to the plan and the long running anti-gas terminal campaign by community group Save Westernport. “This emphatic response [through the online poll] from our community aligns with council’s position that the project poses an unacceptable risk to the environment for unproven economic and resource gains,” the mayor Cr Sam Hearn said. “The result also supports the feedback we’ve received expressing significant concern about environmental impacts and the over industrialisation of Crib Point.

“The community and council are in lock-step on this issue – we don’t want the AGL project to proceed.” Submissions regarding AGL’s environmental effects statement have now closed and the final decision on the gas terminal will be made by the state and federal governments. Councillor Kate Roper said: “The combination of Ramsar wetlands, migratory bird habitat, the UNESCO Western Port Biosphere Reserve and our special marine and coastal environment all add up to a unique mix of elements far too valuable to risk.” Cr David Gill said the state government should “finally listen to their community and scrapped this project before serious damage is done to Western Port, tourism, the fishing industry and people living and working at Crib Point”. He said the proposed pipeline from Crib Point to Pakenham would jeopardise the viability of farms “and essential food bowl products”. Save Westernport says “record numbers” of Victorians lodging submissions against the EES in-

MORE charges have been laid against the homeless man accused of attacking two men with a tomahawk outside Rosebud Plaza, 10.15am, Saturday 29 August. As well as two counts of attempted murder the 48-year-old has been charged with two counts of intentionally causing serious injury, four counts of assault with a weapon, two counts of criminal damage and one of affray. The man appeared at Melbourne Magistrates’ Court on Monday 31 August and has been remanded to appear for a committal mention at the same court on 10 November. Detective Senior Sergeant Miro Majstorovic, of Somerville CIU, said the injured men – aged 47 and 63 of Rosebud – were in a “stable condition” at The Alfred hospital last week. Rosebud police were full of praise for the bystanders who came to the men’s aid in the shopping centre car park after the random attack. “We would like to take this opportunity to acknowledge the quick action and bravery of the members of the public who rendered first aid and assistance to the injured males [on Saturday],” a post on their Eyewatch page stated. “These actions – under extremely difficult circumstances – almost certainly saved lives. We hope that you are as proud of your conduct as we are.” Senior Sergeant Natalie Dollard said while police acknowledged the quick action, her advice “to all in the community” is to call 000 in the first instance. Stephen Taylor

p lu s WE CAN DELIVER YOUR ALCOHOL! www.ryehotel.com.au